The spectacular sight of Swanage Beach lit up with candles to remember loved ones looks set to become an annual event after receiving lots of support from the local community.

Under a frosty sky and with the moon rising over the sea, Swanage’s first Candles on the Beach event organised by Lewis-Manning Hospice Care was a succesful evening although emotional and poignant.

From early evening, candles began to fill up the beach at Swanage

Lights brought a warm glow to a chilly evening

Many hundreds of LED candles in translucent boxes designed to be reused or recycled were placed on the sands at Swanage beach on Saturday 10th December 2022, and brought a warm glow to the chilly evening.

The festival of light delivered a shared, community experience to remember and celebrate the lives of much missed friends and family, and it provided a stunning display as well as a chance to raise funds for the vital charity.

It also gave an opportunity for Swanage residents of all ages to make a silent, moving tribute to their loved ones before the hectic season of Christmas arrives.

Many of the candle boxes were inscribed with personal messages and drawings to make the individual tributes still more poignant.

“It was always our dream to live here”

Marion Fowler, who moved to Swanage with her husband Bill nine years ago before he died, laid a candle in his memory on his favourite spot in the town and said:

“We used to come down here out of season from Kent two times a year for 30 years and it was always our dream to come and live down here when the time was right.

“Then Bill had a health scare and we looked at each other and knew that we shouldn’t put it off any longer.

“It was a dream come true when we arrived here for good nine years ago, and even though Bill only lived for five of those years I knew he would be happy that I stay here. It’s a magical place, not only beautiful but such a friendly place that takes you to its heart.”

“I read about Candles on the Beach on Facebook and as Swanage beach was Bill’s most favourite place I didn’t hesitate to dedicate a candle to him.

“I have wonderful photos of him on the beach and now I have another special memory too.”

Singing For Pleasure performed emotional songs for the crowds

A selection of emotional songs

Along with hundreds of families dedicating candles to their own special people, which were then laid on the beach by a team of Lewis-Manning volunteers, Karen Grant and the Singing For Pleasure group entertained with a selection of emotional songs.

Jo Sharkey, the family support and bereavement lead for Lewis-Manning, led a minute’s silence for those in attendance after telling them that grief was uniquely different for everyone and there was no right or wrong way to deal with it.

Sometimes all we need is a gentle hug

“Grief can take on many forms of emotions at different times, from the sadness of the empty space the person has left to the anger of having to face life without them.

“Bereavement can be a time when the one person who would have helped us through isn’t there.

“Often we find that others return to their lives, and this leaves us feeling alone or not wanting to be a burden to our families when sometimes all we need is a shoulder to cry on or a gentle hug.

“Grief does not have a direction … there is no end date at which it ends. Grief always stays with us, but we learn to live our lives with it alongside us.”

Jo said that she felt the inaugural Candles on the Beach event had been a huge success and she was very hopeful of it becoming an annual event at Swanage.

Swanage has been incredibly supportive

“We had a lot of likes and traffic on our social media pages after we announced that we would run Candles on the Beach at Swanage and presales of candles went really well, especially at our Swanage shop.

“Swanage has been incredibly supportive of us and our ultimate goal will be to run one of these remembrance events every year wherever we have a hub.

“We organised Candles on the Lake in summer at Poole Park, but we feel that the beach setting in Swanage coupled with a crisp December evening has brought a very different and special atmosphere to the event.

“All of the events, of course, could only be run through the hard work of all our volunteers and I would like to publicly thank them for all of their help and support.”

A hospice care hub at the rugby club

Lewis-Manning Hospice Care was set up in 1992 for those with life-limiting illnesses with a centre in Poole, but recently the charity identified a need to provide support and outreach in Swanage, Wareham and other Purbeck communities.

A hub was established at Swanage and Wareham Rugby Club for one day a week, which provides social interaction and arts and crafts therapy as well as clinical intervention.

Lewis-Manning also took the decision to provide more nurses and support to make home visits in Purbeck and, with lottery funding for tablets, a virtual day hospice service has also been set up for those who can’t attend in person.

£2,000 gift for the breathlessness clinic

It has also just received a gift of £2,000 from the Hospital Saturday Fund towards the breathlessness clinic in Swanage, a complex symptom to manage, but one which can impact all aspects of people’s lives and make everyday tasks difficult.

The charity offers free hospice care services to help people to live well through their illness while being closer to home, including wellbeing support, bereavement and family support, therapy and day hospice services.

Some 600 local people are supported every year, but the charity needs to raise more than £2.3 million each year to provide them.

What happened in Swanage this year? Review of the year 2022 As some kind of normality returned to Swanage and Purbeck in 2022, we look back at the top stories of the year. 1 month ago

First Christmas in Swanage for newly appointed rector Preparations are well underway to welcome everyone back into church for the Swanage Town Carol Service at St Mary’s following two years of restricted numbers due to Covid. 2 months ago 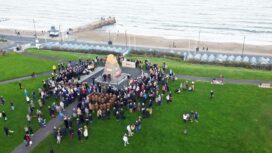 Swanage remembers all those who died in war Remembrance Sunday events took place in Swanage although many attending, including the local MP, were delayed by travel chaos - WATCH PARADE AND CEREMONY 3 months ago