Real ale fans at the Corfe Castle Club are raising a pint glass to their watering hole – which has once again been declared one of the top clubs in the UK in the first year back after Covid restrictions.

After two years of disruption, when small pubs were tested to the limit by the pandemic lockdowns, the Campaign for Real Ale – or CAMRA – has reintroduced its annual competition to find the friendliest bars with the best-kept ales.

The Grade II listed building, in Purbeck stone, was originally the village school

And the Corfe Castle Club, a 200 year old Grade II listed building made out of Purbeck stone which has previously been a village school and the Royal British Legion base for the community, has carried on where it left off in 2019.

After secret visits from mystery CAMRA customers in summer, it was judged to be regional club of the year for Wessex and the Channel Islands against very strong opposition.

It now faces the winners of the other 13 regions in England, Wales, Scotland and Northern Ireland for the overall title, with a winner expected to be announced early in the new year.

Showdown with triple winner of the UK title

It will mean a showdown against three-time winner of the UK title, Cheltenham Motor Club from the South West, which was declared champion just as the Covid outbreak enforced almost two years of lockdowns on pubs and clubs.

But the Corfe Castle Club itself won the regional Wessex title in the same year and feels there is nothing to fear, with its friendly atmosphere and top quality real ales putting it in strong contention for top slot.

Steward Brian Varney – known to all at the club as Chubby – was presented the award on Sunday 6th November 2022 by John Chambers, the East Dorset CAMRA chairman who praised the condition of the club’s three real ales.

Club steward Brian ‘Chubby’ Varney is a legend behind the bar

“We are a very friendly club and couldn’t be happier to be recognised yet again as the best in the Wessex region. We serve the village’s needs as well as serving really good ale!

“It has been a difficult couple of years since we last won the award – after lockdown when there were restrictions on people being inside we had to serve pints from the doorway to people in the car park.

“We are fortunate to have a garden so customers could still enjoy our beers, but they were very unusual times!

“We are here to serve the community rather than to make a huge profit, so we have tried to keep the price of a pint between £3 and £4 and our regulars are a great crowd.

“We will just carry on what we are doing and hope that the mystery judge for the national competition likes it just as much as last time!”

Spectacular views over the Purbeck hills

The Corfe Castle Club was built out of Purbeck stone in 1834 as the village school and later became the Royal British Legion Club before breaking away in 2017 to have more autonomy over its finances.

It boasts a function room for village clubs to meet in, a pool table, darts board, a Purbeck longboard shove ha’penny board and a TV for sporting events, and also a boules pitch – as well as spectacular views over the Purbeck hills – in its beer garden.

The Club of the Year competition has the simple aim of finding the best clubs with a fantastic atmosphere, welcoming surroundings and most importantly, top quality real ale served in great condition. The overall winner will be announced early in 2023.

Difficult time as clubs go from crisis to crisis

“This is an incredibly difficult time for many of our beloved clubs as they go from the crisis of Covid to the cost of living crisis. The fact that we’re still seeing such shining examples of club excellence despite these challenges is incredible, and a real testament to these winners.

“We believe that member only clubs are important community assets that promote the social wellbeing of the local area, and this competition aims to highlight the very best examples across the country.”

The club has three hand pumps, with two regular real ales – Timothy Taylor’s Landlord and Ringwood Razorback – with a third one which is changed regularly.

The Corfe Castle Club members are a friendly bunch

Members at the club are unanimous that the success in the competition is down to Chubby, a real ale fan himself who is passionate about keeping and serving quality real ale in excellent condition.

He is also well known at the club for his famous ‘Chubby rolls’ – huge bar snacks which are said to satisfy any appetite – and for spending his days off at other Dorset pubs in the name of research! 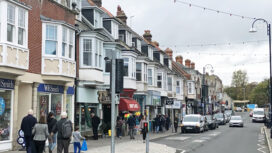 Swanage to pilot scheme to improve access to cash after bank closures An action group made up of financial institutions and consumer groups has visited Swanage to work out a plan to ensure the town still has a guaranteed supply of cash. 1 month ago