Second home owners who don’t let out their property for more than 70 days a year in Swanage and across Dorset, face paying twice the amount of council tax from April 2024.

The move which is estimated to raise around £10 million in additional income, is to be proposed at the Dorset Council Cabinet meeting on Monday 23rd January 2023 by the deputy leader of the council Peter Wharf, who represents West Purbeck.

Empty homes would also be hit with extra tax

The Dorset Council decison is being rushed through in the hope of taking advantage of the Government’s Levelling Up and Regeneration Bill as soon as it gets Royal Assent.

A key element of the Bill is to allow councils to double council tax on homes that are only occupied ‘periodically’ ie second homes and also allow a 100 percent council tax premium on homes which have been empty for a year or more.

If passed, as expected in 2023, the new law would allow councils to start charging second home owners twice as much tax from 1st April 2024, an opportunity Dorset Council wants to take advantage of from day one.

Swanage had 1,032 properties classified as second homes in November 2022 according to Dorset Council

Dorset is one of the primary counties in England where second home ownership is at its highest; and within Dorset itself, Swanage and Purbeck are at the top of the table for towns and parishes with the highest levels of second homes.

Dorset Council figures from November 2022 reveal that Swanage had 1,032 properties classified as second homes, with approximately a further 1,000 across Purbeck, including the villages of Studland, Corfe Castle, Church Knowle, Lulworth, Langton Matravers, Worth Matravers and Wool.

The report to the Cabinet meeting of Dorset Council, to be presented by councillor Peter Wharf, says:

“From a Dorset perspective, this Bill once it has secured Royal assent could have significant positive financial implications.

“Based on the latest figures from November 2022, Dorset has 5,722 second homes. Initial high-level analysis suggests that the application of a 100 percent premium on second homes could generate around £10 million in additional council tax revenue.

“Advice would be to expect a downward shift based on owners changing use or selling. As such, our prudent planning assumption is in the range of between £8 million and £9.5 million for potential additional revenue.”

The council also expects that being able to charge double council tax on homes which have been empty for a year could bring in another £600,000.

Beautiful in any season, who wouldn’t want a holiday home in Swanage?

The report highlights that some second home owners may try to avoid paying double council tax by transferring their homes to business rates as holiday lets.

However, the Cabinet meeting will be told:

“This risk should be reduced with the government also bringing in a requirement for people to produce evidence to the Valuation Office Agency that alongside having their property available to let for at least 20 weeks in a year, it must also have been actually let for at least 70 days.”

Although there is no official planning definition of a second home, the English Housing Survey has declared that it is a home which is not used by anyone as a main residence, but is occupied occasionally – for example, as a holiday home or when working away from the main home.

In the Levelling Up and Regeneration Bill the terminology used is ‘dwellings occupied periodically’. Further clarity may be forthcoming when the Bill is passed.

However a home rented from a landlord, one which has been bought but not yet moved into, or a home occupied by a family’s children while at university are not considered to be second homes.

A Dorset Council background paper published in 2021 into second homes found that second home ownership in Dorset had resulted in increased house prices and reduced housing supply, with some people who worked in the area being forced to move outside the district.

“Communities often view high rates of second home ownership as a negative, as they can result in seasonal ‘ghost towns’, with many properties left empty for much of the year.

“However, not all second homes are bought by city dwellers for holiday use; some are used as holiday lets for most of the year which brings in much local income, or are bought by people looking to move to the area, so it is in their interest to play an active part in the community.

“The issue in Dorset is primarily with people purchasing second homes for ‘holidaying’ rather than for work purposes, but this is not to say that they are additionally not being let out all year round.

“Arguably, presence of permanent residents would have a more positive impact on local communities than holiday makers who may stay for a few days and who do not play a part in the community.”

Families develop a connection with the area

It was also noted that the higher cost of housing caused by second home owners did mean that local employers could not always employ local staff as there was nowhere for them to live, leading to a decline in the local stores, post offices and bus services.

The former Purbeck District Council had also discussed the issue with 30 local businesses and found conflicting views between those in hospitality who benefited from second home owners and those whose businesses were not seasonal.

There was anecdotal evidence of second homeowners who develop a connection to the area and eventually move in permanently and bring their wealth with them, continuing to spend at the businesses they grew to enjoy through their holidays.

But other businesses reported significant negative effects, such as a younger qualified workforce who had to continue to live with their parents or eventually had to move further away from their place of work.

“The lack of affordability is a social problem; and the effects of additional commuting distances can mean increased private car journeys, causing environmental impacts through congestion and air pollution.

“Although some businesses in Purbeck have experienced positive implications from high rates of second homeownership, this is very dependent on the type of business.” 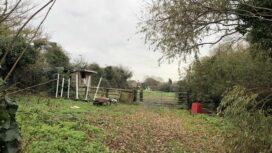 Horse paddock in Swanage tipped for new affordable housing It’s a longshot but a field currently used for horses may become the location for Swanage’s first community-led social housing project. 2 months ago