End of the Falklands War remembered in Swanage

The 40th anniversary of the Falklands War was commemorated in a ceremony at the Swanage War Memorial.

Veterans of the conflict along with local people gathered for the service at 2.30 pm on Saturday 11th June 2022. The war started when Argentina invaded the Falkland Islands and lasted for 74 days, ending on Monday 14th June 1982.

Veterans and dignitaries gather at the war memorial

On a sunny but windy afternoon, those who died in the battle over the islands in the South Atlantic were remembered, as well as those who suffered from the mental trauma of war.

In all, 255 British personnel lost their lives in the conflict, as well as 649 Argentinians and three Falkland Islanders.

The gathering was welcomed to the ceremony by Swanage resident and former soldier in the Royal Signals, Frank Roberts.

This was followed by a reading by the president of the Swanage Royal British Legion John Corben and an address by the Reverend John Cooper.

The names of the British who had died in the conflict were read out by (left to right) Janet Dyke, Nicky Churchill and Carolyn Hooper

After prayers, the act of remembrance and the Last Post, the names of the UK service personnel who had lost their life in the war were read out, including the names of the three Falkland Islanders who died.

Fighting the blustery conditions, the roll call was read out by Janet Dyke, Nicky Churchill and Carolyn Hooper.

The occasion was concluded by the chair of the Swanage Royal British Legion Steve Churchill who read out a poem about those who die at sea during war.

In ocean wastes no poppies blow,
No crosses stand in ordered row,
Their young hearts sleep… beneath the wave…
The spirited, the good, the brave,
But stars a constant vigil keep,
For them who lie beneath the deep.
‘Tis true you cannot kneel in prayer
On certain spot and think. “He’s there.”
But you can to the ocean go…
See whitecaps marching row on row;
Know one for him will always ride…
In and out… with every tide.
And when your span of life is passed,
He’ll meet you at the ‘Captain’s Mast’.
And they who mourn on distant shore
For sailors who’ll come home no more,
Can dry their tears and pray for these
Who rest beneath the heaving seas…
For stars that shine and winds that blow
And whitecaps marching row on row.
And they can never lonely be
For when they lived… They chose the sea. 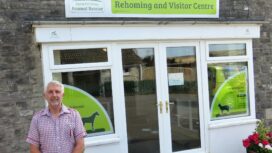 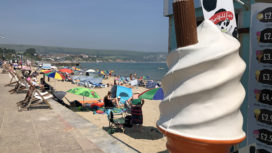 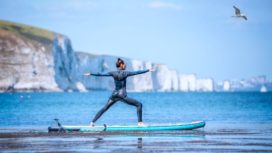