After one of the most devastating forest and heath fires in Dorset in living memory, Wareham Fire Station has posted an inspirational photo showing the first green shoots appearing from the charred heathland.

The fire service has also reminded people that this fire was avoidable and caused by the irresponsible use of disposable barbecues.

“11 days ago someone decided to have a party with disposable barbecues and a campfire in Wareham Forest during a pandemic. It’s taken over 150 firefighters from different counties, water-carrying helicopters, nine kilometers of hoses, all working tirelessly around the clock with 24/7 crews, to put out the inferno.

“We lost over 220 hectares of heath and forest BUT nature will not be beaten, already the birds are back in the charred trees, insects and deer are back and the plants are growing again, tiny acts of defiance and hope in the burnt out remains. There is always hope no matter how hopeless it feels.”

Plea to avoid barbecues and bonfires

With hot weather forecast for the rest of the week, there’s also a plea to avoid barbecues and bonfires to reduce the burden on the fire crews’ already stretched resources.

Purbeck Police, who has been patrolling heathland due to the increased risk of fires during this dry and warm weather, said:

“Purbeck has lots of beautiful heathland to enjoy but please, do not have any barbecues or open fires when you visit.”

Disposable barbecue found in a bin

Only yesterday, Swanage Fire Station was mobilised to a bin fire locally. On arrival, crews found a disposal barbecue had been put in a black bin liner and thrown in the bin. ‬

“This is obviously not a great idea and we can’t stress enough the importance of disposing of barbecues properly, especially at the moment.‬”

Durlston Country Park, where people were spotted having a barbecue yesterday, is also asking people to behave responsibly on its land. It said:

“The Fire Service has been really stretched by the Wareham Forest fire over the past week, plus other fires. As conditions continue to be dry, the fire risk remains high, so please, no barbecues or campfires at Durlston.”

A disposable barbecue found on Studland Beach by Swanage Coastguard 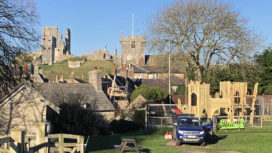 Corfe gets a new castle but this time it’s for the kids! Work is nearing completion on a new play area for youngsters in Corfe Castle and it’s taken its inspiration from the village’s most famous landmark. 7 hours ago 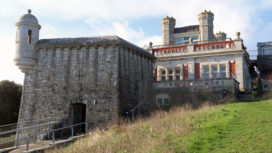 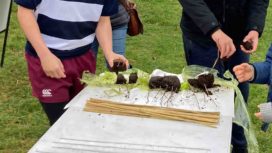 Corfe gets a new castle but this time it’s for the kids! Work is nearing completion on a new play area for youngsters in Corfe Castle and it’s taken its inspiration from the village’s most famous landmark. 7 hours ago Three men arrested on suspicion of kidnapping in Swanage 1 day ago Great grandson takes the helm at Swanage newsagents 2 days ago Swanage and Wareham firefighters do animal rescue! 3 days ago More Blackpool than Blue Pool, Purbeck attraction gets illuminated 4 days ago