Work to restore a Victorian locomotive is steaming ahead after it was gifted to Swanage Railway by the National Railway Museum.

The Victorian T3 class locomotive was built in 1893 but hasn’t hauled a train for more than 70 years.

Left to right: Swanage Railway’s Nick Lloyd, Nathan Au, Steve Doughty and Will Armston-Sheret at the Flour Mill engineering works in Gloucestershire where restoration of part of the Victorian loco is taking place

The London and South Western Railway locomotive No. 563 narrowly escaped being scrapped after World War Two and was eventually given to the Swanage Railway Trust in 2017.

Work on its £500,000 restoration began during 2019 with most of the work taking place using specialist contractors in Gloucestershire.

However the restoration of the locomotive’s tender – which stores 3,300 gallons of water and three tonnes of coal for the engine – will take place at Swanage Railway’s Herston engineering works, on the outskirts of Swanage.

“563 is a direct link to the Swanage Railway’s past“

“The last time that 563 steamed and hauled a train was in 1948 so for more than 70 years, many thought they would never see a unique T3 locomotive work again.

“We are working hard to ensure the engine’s preservation for future generations to enjoy and the best way to do that is by seeing 563 brought back to life.

“With an incredibly rich history to tell – given its Victorian heritage – the T3 is unique because it is the only surviving tender engine designed by renowned locomotive engineer William Adams.

“The only steam locomotive owned by the Swanage Railway Trust, a working T3 gives us the opportunity to show our visitors what the railway was like during the industrial and social development in Dorset at the end of the 19th century.

“563 is a direct link to the Swanage Railway’s past – right back to the early days of the London and South Western Railway when holidaymakers first visited Purbeck by train,”

To help fund the restoration work in Swanage on the tender, a £25,000 appeal has been launched.

“The Swanage Railway Trust is initiating this winter appeal to raise £25,000 towards the cost of the restoration of the T3 tender at our Herston engineering works.

“As always, we’d like to thank our supporters for their generous standing orders and donations that have helped us achieve a significant number of milestones on the railway in a relatively short amount of time.

“While the work on the tender at Herston is of importance, so is the continued and expert work on the restoration and overhaul of the locomotive at the Flour Mill engineering works in Gloucestershire.

“If their continued support – as well as interest and contributions from new supporters –continues then the T3 could be back in steam and hauling a train during 2023 which is very exciting.” 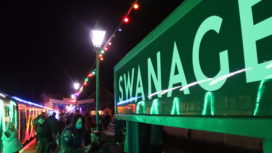 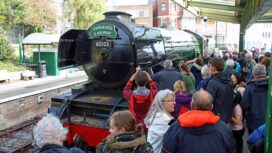 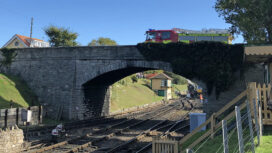 Fire crews navigate railway crowds to reach Swanage garage fire Shortly after the steam locomotive Flying Scotsman arrived in Swanage, the local fire station received a report that a garage was on fire. 1 month ago