The Dorset and Somerset Air Ambulance was called to rescue a walker who had fallen on the South West Coast Path near Peveril Point in Swanage.

The incident happened in the afternoon on Thursday 29th December 2022, a popular day for walking due to the dry and sunny conditions.

The Swanage Coastguard team was deployed to help the walker, who had broken their ankle and was in a lot of pain.

The volunteer coastguards also assisted the air ambulance to land safely on the helicopter landing site at Peveril Point near to the Swanage National Coastwatch Institute (NCI) lookout tower.

“Slipped on the footpath”

“The team was paged along with South Western Ambulance Service NHS Foundation Trust and Dorset and Somerset Air Ambulance to a walker who had slipped on the footpath and broken their ankle.

“After the casualty assessment and pain relief was administered, the casualty was transferred on a scoop stretcher and carried to the helicopter, where they were flown to hospital.”

The walker was taken to hospital by helicopter

The day before on Wednesday 28th December 2022, South Western Ambulance Service declared a Critical Incident because of the extreme pressures it was experiencing, which affected its ability to respond to patients.

The ambulance service which covers Dorset, Cornwall, Devon, Gloucestershire, Somerset and Wiltshire said that at 11.30 am on Wednesday 28th December 2022 there were 482 patients waiting for ambulances and 106 patients awaiting handover at hospitals across its South West region. 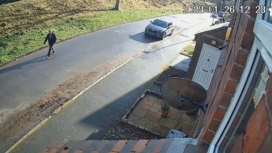