Music master Lawrie Sandford hopes that the beats of Brazil will bring some warmth to winter nights in Swanage by starting up a samba drum band in time for the town’s summer carnival parade.

Lawrie, who has run Swanage CommUnity Drum Circle for the last six years, felt that fate was at work when he was bewitched by the beat of a band taking part in Swanage Carnival – just days after being gifted a full set of samba drums.

Thousands of spectators at Swanage Carnival were bewitched by the beat

He approached Samba Panashe, the Dorset club which had paraded through the crowds getting everyone up on their feet, and asked for their help in setting up a similar band in Swanage.

And four months later, samba specialists Lelani Cleary and Reif Williams are about to join Lawrie with the aim of forming Swanage Samba and coaching the band to appear in the 2023 summer carnival.

Free taster sessions for people to try their hand at samba drumming will be held at the Emmanuel Baptist Church in Victoria Avenue, Swanage, on Saturday 26th November 2022 and Saturday 7th January 2023, using drums which the Swanage and Purbeck Development Trust no longer had a use for.

“I was made an offer I couldn’t refuse”

“The Children’s Centre had uncovered a set of samba drums which had been there for years – but they needed to be moved on as there was no longer space to store them.

“I was asked if I would be interested in them – and it was an offer I couldn’t refuse, as a full set of samba drums can cost up to £1,500 and I did not want to see them being thrown out or lost to Swanage.

“I know the huge annual turnout and enthusiasm for Swanage Carnival week, and how well it raises funds for local charities, so I started to look for a way forward to create a Swanage samba drum and percussion group.

“A few days later, the 2022 carnival took place and I saw Samba Panashe, a Bournemouth samba drum group, playing on top of a Breezer bus and exciting the crowd, so I lost no time in contacting them to see if they could help me set up a samba group in Swanage.”

Thousands cheered on the band

After two years of absence caused by Covid and lockdown, Swanage Carnival returned in July 2022 and thousands of people cheered on the Samba Panashe band as they drove through town streets on an open top bus.

Now the plan is to have Swanage’s very own samba drum and percussion band to enter the carnival as well in 2023 and beyond.

Chris Masters-Bond has led the Bournemouth based Samba Panashe group for many years, but with their growing popularity, he wasn’t able to help directly when Lawrie asked him to help.

But two rising stars in the group, Lelani Cleary and Reif Williams, were eager to take on the task of recruiting and training Swanage Samba.

Samba Panashe in training at their Bournemouth base

Samba bands are friendly and fun

“There weren’t many samba bands in Dorset when Samba Panashe set up, but the drum rhythm is very infectious and is popular wherever we go – lots more people are taking it up now.

“We have taken part in Swanage Carnival for years and we always get a fantastic welcome and a great reaction to our music, the crowds are so enthusiastic.

“We have already seen a lot of interest in the samba taster sessions we will run in Swanage – there’s absolutely no experience needed, just come along and try out the various instruments, enjoy the rhythms and have fun!

“Samba bands are friendly and fun, for people of all ages and from all walks of life – you don’t need a musical background, or even need to own a drum, you just need a sense of rhythm and a passion for entertaining!”

Cruising Swanage Beach to the beats of the Rio Carnival

Classic samba music is the sound of Rio Carnival and is a foot-tapping, hip-shaking experience in lively 2/4 time, found at the heart of much Latin American pop including music by Nelly Furtado, Jennifer Lopez, Taylor Swift, Shakira, Ricky Martin – even artists like Ed Sheeran and Justin Bieber have been influenced by the beats.

“I am delighted that Lelani and Reif are so interested in helping us set up a samba group in Swanage and hope that there is a good response to the taster sessions.

“I have been drumming since the age of 11, have been in bands and have run the Swanage CommUnity Drum Circle for the past six years, but I am pushing 70 now and don’t have the time or energy to take on a new group.

“It needs young blood to take on a high-energy band like Swanage Samba will be, and I was delighted that Lelani and Reif have taken on the challenge.

“The two taster sessions are to see if there is enough local interest to start the group, but as Swanage is such a musical and enthusiastic community, I hope it will be a foregone conclusion.

“I would love to see a home grown samba band taking part in Swanage Carnival!”

For exact timings of the taster sessions, people of any age including children can register their interest with Lelani on Facebook or by emailing swanagesamba@gmail.com

Samba Panashe have appeared at festivals, competitions and even on Britain’s Got Talent 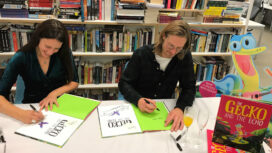 Swanage star charged extra to take home Best Actress award Swanage actress Nicole Faraday has picked up the biggest award of her life at an international film festival - and was promptly charged excess baggage fees to bring it back ... 1 month ago 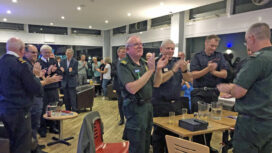 Winners of the Swanage Community Awards 2022 announced Swanage residents, who were judged to have excelled in their contribution to the town in 2022, were presented with a community award at a ceremony in Swanage. 2 months ago