A new type of boat mooring in Studland Bay could be the key to protecting seagrass – the essential habitat for seahorses – according to the results of a seabed survey by a team from the University of Southampton.

The new research findings by the university’s marine faculty were presented to the Marine Autonomy Technology Showcase (MATS) in Southampton on Thursday 10th November 2022.

SMARTY200 prepares to take the plunge in Studland Bay in Dorset

The survey, conducted using advanced underwater technology during summer 2022, found that the 10 eco moorings being trialled in the bay, unlike traditional moorings and anchors, didn’t drag along the seabed uprooting the seagrass.

The university team now plans to follow up the results by a request for government funding to extend the survey.

The report found that eco moorings that expand and contract with the tide, don’t cause damage to the seabed unlike traditional anchors and chains

Most comprehensive survey ever

At the MATS conference, Dr Miguel Massot-Campos from the University of Southampton presented the first results from the summer’s seagrass study in Studland Bay, which he said was the most comprehensive ever thanks to computer automation.

He described how the underwater vehicle SMARTY200 had delivered incredible results by taking more than 34,000 precise images of the seabed over eight missions, mapping the seagrass beds in the bay on a scale that was not previously possible.

The very latest computer data technology was then able to colour correct, scale and resize all of the images and sort and deliver the 200 most representative images, saving many weeks of human input.

“Studland Bay is a designated Marine Conservation Zone with multiple measures in place to protect the seagrass meadows there from human recreational activity.

“But every time a leisure boat anchors there it scars the seafloor and kills the seagrass, a damage which over time could lead to local flooding and loss of shoreline.

“The boat community have installed 10 eco moorings which have almost no footprint on the seafloor and don’t damage the environment in the way that moorings with a chain and anchor do.

“We now have this accurate picture of the seafloor because robotic submersibles like SMARTY200 can dive deeper and cover much larger areas than human divers.

“They also know their position underwater very accurately, which makes repeat monitoring of large areas possible. This is important for us to capture how underwater environments change over time.”

“From the diver surveys we can tell that areas where the eco-moorings have been installed have seen no detrimental effect on the seabed, with seagrass shoot density and leaf length showing no statistically significant difference to those from the survey before the anchors were placed.

“This is a positive outcome suggesting these could be a good means of conserving the seagrass beds without restricting the boating community’s ability to enjoy the site.

“We would need more surveys to see seasonal changes – our survey was a snapshot in summer – and ideally one would want to repeat these over multiple seasons. I am working on a proposal that, if funded by the government, may allow us to do just that.”

A voluntary ban on boats dropping anchor at the southern end of Studland Bay was introduced in June 2022, after 10 eco moorings had been installed at an estimated cost of £25,000 the previous year.

However over the summer, hundreds of boats visited the area meaning that 10 eco moorings wasn’t enough

The Seahorse Trust, working in conjunction with Boatfolk and a whole raft of environmental groups, has now applied to the Marine Management Organisation for a licence to extend the scheme up to a maximum of 100 eco moorings.

While the scheme, if approved, is expected to cost a total of £350,000 to complete over the next couple of years, it is expected to be just the start of a project to restore seagrass beds in Studland Bay and stop the seahorse population from disappearing.

A spiny seahorse in Studland Bay

Feeling optimistic about the future

Seahorse Trust founder, Neil Garrick-Maidment said that divers this year had only observed seven individual seahorses as hundreds of boats had returned to the bay after two quiet years of lockdown.

“During the Covid years, we estimated that there were 46 individual seahorses in total as the bay was so much quieter.

“Immediately after lockdown as the boats started to come back, the seahorses started to disappear quite quickly, but now we have the boating community working together with conservationists, I feel optimistic for the future.

“It is great news that the eco moorings have no negative effects at all on the seagrass fields and if we can get 100 of them in Studland Bay instead of just 10, it would solve so many of the problems we have there.

“Although it is a lot of money to raise, we are hoping that companies and even individuals will feel strongly enough about what we are doing to sponsor an eco mooring.”

“We never wanted to ban boats from the bay”

“While the scheme will have to be done in stages, it should just be phase one of a wider project to restore seagrass, enlarge the meadows, seed new areas of the bay and encourage the seahorses back.

“We have never wanted to ban boats from the bay, we just wanted to find a way to allow the boats to carry on while protecting such an important ecosystem at the same time.

“There was always going to be suspicion of something new and different, but to have the scientific proof that the eco moorings don’t cause any damage at all to the seagrass beds has allowed both the boaters and conservationists to work together.”

The Seahorse Trust hopes to be able to start installing new eco moorings either just before or just after summer 2023, depending on the seahorses’ migration pattern.

Seahorses and seagrass are threatened species

Seagrass, the only flowering plant which lives in the sea, forms underwater meadows which not only provide a home in Studland Bay to both of Britain’s seahorse species, but also absorbs and locks away carbon 35 times more efficiently than rainforests.

A growing call to save the threatened seagrass meadows was taken up at RSPB Arne by zoologist Sophie Pavelle, who chose the Purbeck nature reserve to launch her latest book to champion forgotten species threatened by climate change.

In Forget Me Not, Sophie writes about her adventures using low carbon transport to seek out, observe and get readers excited about rare UK species which could disappear by 2050 if their habitats continue to decline – including harbour porpoise, dung beetles and seagrass.

“Submerged meadows reeled me in hook, line and sinker”

“I was among the millions who were unaware of the submerged meadows that border the coastline of the British Isles, let alone even remotely awake to their importance and plight.

“But the very idea of submerged meadows that annually flower and go to seed summer after summer, that have teams of crustacean pollinators and house an entire world of dependent life soon reeled me in hook, line and sinker.

“Some meadows are so vast that they could cover more than 400,000 rugby pitches. How they have passed us by for so long is a mystery, but the decline of this habitat is of huge international concern.

“Latest figures suggest that global oceans could already have lost 92 percent of their seagrass – two football fields disappearing every hour since 1980 thanks to disease, extreme weather and physical disturbance from us.”

Divers from the University of Southampton checked the Studland seagrass meadows

“But although what is happening to our natural wildlife in Purbeck, in Britain, in the world, is quite scary, I didn’t want to lecture people about it or make them feel guilty.

“I wanted to take topics like windfarms and green energy and threatened species and write about them in a relatable and accessible way which might get readers as passionate about them as I am.

Seahorses use the seagrass to anchor themselves in their feeding grounds 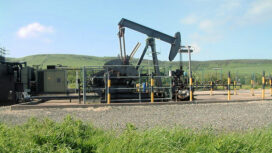 Kimmeridge oil well to stop contentious burning of waste gases A controversial gas flare which burns off methane along the World Heritage coastline at Kimmeridge could be extinguished within three months. 1 month ago