A retrospective planning permission application has been submitted by the owner of a once derelict Victorian walled garden near Wareham to become a green tourist destination promoting rewilding and natural gardening.

Carey’s Secret Garden, which was discovered by Dorset entrepreneur Simon Constantine when his family bought the Grade II listed Carey House near Wareham in 2019, is already welcoming visitors to see the transformation.

Now plans have been submitted to Dorset Council to formalise the status of Carey’s Secret Garden – which has already been a low key tourist attraction for the past two years – and to set out its hopes for future expansion.

In the application, planning consultants Luken Beck, acting on behalf of Carey’s Secret Garden said that it was a highly valued educational centre which will use existing, attractive buildings to safeguard its future whilst still being sensitive to its historic Victorian setting.

An edible hedgerow, traditional orchard, wildflower meadow, rose garden, a fruit cage and a tea and herb garden are just some of the attractions already in the restored three and a half acre garden with Victorian brick wall boundaries.

Even in the middle of autumn, bees still go about their work

But Simon, whose parents Mark and Mo Constantine are the cofounders of the Poole-based business Lush Cosmetics, wants the secret garden to play a larger part in spreading an important message across Purbeck.

The plan is to welcome in charities, schools and community groups to teach people about wildlife friendly gardening and biodiversity and to support local green businesses.

Swanage and Wareham urban farm shop, butchery and restaurant The Salt Pig is running the cafe, and only serves food from the local area, and there is a partnership with Dorset company Gaia which offers the UK’s first wooden membership card, giving discounts from local businesses.

Dorset Council planners are considering an application from Simon to ‘retain and safeguard the garden in its original intended use after years of disrepair’ as a ‘sustainable tourist and educational destination’ .

The application includes building a new timber shed and a compostable toilet block in the walled garden, and to use existing barns and bothies – buildings within the walls – as an eco-friendly education centre, cafe and plant shop.

The local Wareham St Martin parish council has no objection to the plans, while Natural England agreed it would have no adverse effect on the landscape, but did suggest creating a new pond, restoring hedgerows and adding swift and bat boxes.

However, the highway authority has requested that visibility is improved for cars at the entrance after an objection was received from one Wareham resident, who was concerned about encouraging more public events at Carey’s Secret Garden.

In the submission to Dorset Council, objecting to the planning application the local resident said:

“The road to this property is not an easy route with no lighting or markings and very fast vehicles speeding along the road where locals, elderly, dog walkers, and disabled walk along this road daily, taking their life in their hands.

“When will this be thought out and addressed properly? I for one have had near misses with speeding vehicles driving around blind bends in the middle of the road, it can only get worse.”

But Simon says that the garden is designed to be an intimate experience with a limited number of visitors at any one time. Garden visits are currently running between 10 am and 4 pm from Thursdays to Saturdays and daily visitors are strictly limited to no more than 50.

A water feature is the centrepiece of the new gardens

Garden was so overgrown it was barely visible

The original walled garden and gardener’s cottage were built in 1883 and a large extension to Carey House was built in the 1920s and includes a swimming pool and gazebo.

When Simon bought Carey House, the garden was so overgrown with brambles, ivy, laurel and grass that it was barely visible and thought to have been untouched since the mid 1970s.

It had once been used for growing food for the estate and still had a dairy paddock, piggery, potato store and an old dairy with rusted milking machinery, along with herbaceous borders, fruit trees and vegetable beds.

Early morning mist and frost roll out of the garden

“Once rediscovered and cleared, the red Clayton brick walls were found to be in surprisingly good condition. The main restoration took place around the small, intricate archway at the entrance and the roofs, windows and doors of two of the buildings within the wall itself.

“The walls are earmarked to become Grade II listed buildings – the garden is unusual in that three walls contain the warm air while the southern boundary is railed fencing which allows early morning mist and frost to roll out of the garden, leaving trees and crops untouched.

“Beyond being a productive and beautiful garden, Carey is a space to grow skills and inspiration through our unique events, whether that’s foraging for mushrooms or identifying moths, sowing seeds or growing a scented garden.

Traditional crabapple trees grow in the same garden as nectarines

“The Purbeck bioregion – the plant life, soil, wildlife and humans that fill it – dictate a lot of the decisions made at Carey, from what we grow to the fertiliser we use.

“We have carefully thought through every decision so that we can make the garden a space for the community, be sustainable and eco friendly and maintain traditional English heritage while we explore plant diversity from around the world.

“We are proud to open our walled garden to visitors. Although the garden is still very much in its infancy, we want to share our hard work and vision since discovering the hidden, overgrown and dilapidated walls a few years ago.”

“Here at Carey, we are lucky enough to have our own water supply in the form of a diverted watercourse off the River Piddle, known as North Stream.

“However, due to the prolonged period of very hot, dry weather, even this supply dried up totally from mid-August, leaving us really struggling to irrigate certain plants.

“I feel the principal reason we have come through what has been the driest period in this area since 1976 relatively unscathed is simply down to the types of plants we grow here at Carey.

“Most are drought tolerant, aromatic plants such as lavenders, salvias, scented pelargoniums and herbs, including a wide variety of rosemary, thyme, savory, oregano and culinary sage.

Sub tropical plants have been happy growing in the Secret Garden

“The real stars in the garden that have thrived in these Mediterranean like conditions are the peach, almond and nectarine trees, which have produced multiple fruits.

“I am also very proud that after many years of trying, I have finally managed to get several varieties of our ginger lilies to bloom, which are quite magnificent!

“Climate change is becoming more evident year by year. We are clearly going to have to adapt our thinking when we are choosing what plants to add to the garden.”

A decision by Dorset Council on the planning application is expected at the beginning of November 2022. 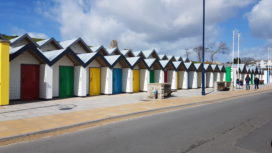 Race for Swanage beach huts leaves visitors out in the cold A surge in local people taking out bookings for seafront beach huts in Swanage could mean holidaymakers will struggle to find one this year. 8 months ago 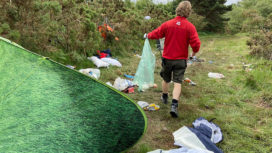 As half term holiday looms, authorities warn against travel to Dorset Dorset Police have revealed that they’ve issued more than a thousand fixed penalty notices since the start of the pandemic, amidst a stern warning to “explore from your door”. 2 years ago