There’s no trick about the latest treat from a Purbeck fruit farm – pick your own pumpkin month at Lenctenbury Farm, near Corfe Castle, has become a screaming success attended by thousands.

Farmer Andrew Carlyle has had to increase the number of pumpkins grown at the farm opposite the Halfway Inn at Norden, from 2,000 in 2021 to 3,000 in readiness for Halloween 2022, as they all sold long before October 31st last year.

He believes that he was the first farm in Dorset to offer a Pick Your Own Pumpkin season in 2019, when he tested the market with 500 of the large orange fruits and sold out before you could say boo!

Unlike many businesses, it wasn’t badly affected by Covid lockdown, as it was largely an outdoor activity – and even when Halloween parties were banned, families still decorated for the spooky season with jack o’ lanterns.

Some of the gourds already in the Lenctenbury Farm shop

Supply has not yet met huge demand

“We have increased the number of pumpkins we grow every year, but we still haven’t produced enough to keep up with the demand.

“Although we had 2,000 for sale in 2021, we were sold out before the start of half-term, eight or nine days before the end of October.

“It was a real shame to have to turn away families who had waited until half-term to bring their children out to look for their perfect pumpkin, so we have increased numbers by another thousand this year and hope that will be enough.

The pumpkin patch can get a bit muddy in October

Happy to visit even on wet and muddy days

“Before 2019, we already sold pick your own strawberries, blueberries, raspberries and blackcurrants here, but the farm in October is very different to the way it is in summer.

“My wife suggested trying out pick your own pumpkins when it hadn’t even crossed my mind that people might visit us when it was cold, wet and muddy!”

Even the farm cats appreciate the pumpkins

Saved up to buy a farm

Andrew grew up on a farm and studied agriculture at university, but went into market research and analysis, taking a job in the world of insurance.

But missing farm life, he saved up until he was able to buy Lenctenbury Farm in 2002 and started to build up a fruit business in his days off and at weekends.

He finally gave up his insurance job in 2009 and has never regretted it, despite recognising that farming will never make him rich and that there’s never a month of the year when there isn’t work to be done out in the fields.

In summer, leaves will conceal most of the growing fruit

Supermarkets want to pay as little as possible

“It’s a wonderful way of life but it can be difficult, and it is very expensive to invest in plants which can take years to become mature and sell the fruit which supermarkets want to pay as little as possible for.

“In 2003, I sold punnets of blueberries to the supermarkets at £1 a punnet and this year we were lucky enough to get our first increase in price paid, to £1.10 per punnet.

“Supermarket prices were £9.50 a kilo in 2002 and today they cost £5 a kilo. It costs farmers about £5 just to pick a kilo. When I had a rant about it, I was told that blueberries from Poland were £2 a kilo to be picked, packed and delivered to their doorstep.

“That’s why I sell direct to the public, but also find that they really enjoy coming out to the farm and seeing how food is grown – it becomes a family experience to get out into the fields and choose their own fruit.”

Lenctenbury Farm is open everyday from 10 am to 5 pm. Pumpkins are priced at £1 per kilo, with the heaviest two grown this year topping the scales at 33 and 34 kilos.

The giant pumpkins are expected to be sold to photographers or Instagram influencers for carving projects and Andrew hopes to see what masterpieces they come up with this year.

The farm is also selling smaller pumpkins and squash in a huge variety of shapes and colours – the smaller ones are becoming increasingly popular among families who decorate their homes not only for Halloween but also for autumn. 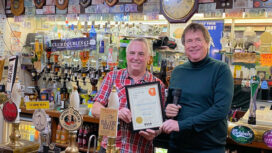 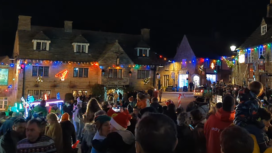 A robin for Robin: Corfe Castle switches on its festive lights There’s a special addition to the Corfe Castle Christmas lights this year to remember a local man who was a stalwart of the community. 5 hours ago 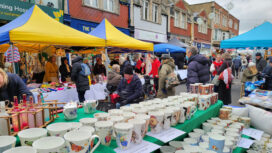