Talented 17 year old golfer Tom Bastow from Swanage, walked in the footsteps of golfing legend Justin Rose – quite literally, when he was chosen to caddy in a group with the former world number one at Wentworth Golf Club.

Tom, who recently played in his first international match for Wales against the other home nations, was caddy in Justin Rose’s group at the celebrity Pro-Am tournament on Wednesday 8th September 2021, the day before the BMW PGA championship at Wentworth.

“It was an amazing experience to be able to watch and walk so close to my idol and to be able to ask him as many questions as I wanted.”

Tom made his international debut for Wales in August 2021

Tom’s international break for Wales, thanks to his mother’s family ties, is a major staging post in his career, as he hopes to follow in the sporting legend’s footsteps.

He’s been signed up for another year for Wales and intends to take up a scholarship at an American University and compete in the Junior European Open in Spain in 2022.

“It was a great experience to play internationally against top players. It’s just a different level of golf altogether. It’s what I’ve been working towards for a long time.”

Tom has been playing at the Isle of Purbeck Golf Club since he was five and still has the same coach.

“A lot of support”

“The members always ask how I’m getting on. I feel I get a lot of support from them.”

Head Club Professional Philippe Bonfanti, originally from France, and trained in Manchester, has been working at the Isle of Purbeck club for 15 years. He’s the only coach Tom’s ever had.

“He is very committed, he’s hard working and he’s been given great opportunities and made the most of them.”

Club professional Philippe Bonfanti has huge respect in the game

The other key figure in his golfing life is his mother Paula, a former police dog handler, who now runs Pinks Electrical in Swanage and takes him to games all over the country.

She’s been steering his career from behind the scenes from earliest days.

First golf lesson at the age of five

“It’s a natural thing for parents to be proud of their child’s achievement but I’m in awe at the number of hours that he puts in.

“Philippe has been a fantastic coach who has had loads of time for him. I’m so glad I found him.”

Tom and mum Paula on course

Tom, who has a plus one handicap, is currently studying sports science at college and is hoping to take up a scholarship at an American university next year.

He and his mother put in around 6,000 miles a year travelling the country to play in matches. He recently came 28th in the elite juniors Peter McEvoy Trophy.

“My mother has been a huge support. I simply wouldn’t have been able to do what I do without her.

“And Philippe must be one of the best coaches around. He just knows everything that I need to know and he’s always supporting me. We keep on pushing forward to the next goal.”

Tom has certainly come a long way since those first plastic clubs in the back garden.

“I played football for a bit but had to choose between the two and luckily enough I chose golf because I wasn’t really very good at football.”

Picking up trophies is becoming a habit

“Golf is about the mental side”

And the secret to being a good golfer?:

“To be a good golfer you have to have the right attitude towards golf, on and off the course. A lot of golf is about the mental side, you’ve got to be strong mentally and stay positive all the way through.”

Swanage man wins trip of a lifetime to Vegas poker tournament A Swanage poker player is finding it hard to keep a straight face after being dealt a place in a competition in Las Vegas after winning a regional final. 2 months ago 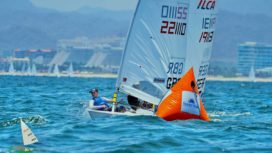 Swanage sailor beats illness to take 11th place in the world Despite a gruelling experience, Sam Whaley who learnt to sail at Swanage Sailing Club, has achieved a personal best at the Laser World Championships in Mexico. 2 months ago