The starlings can be spotted in Studland again this winter and they are putting on an amazing display, as they swoop and dive in unison called a murmuration.

The show starts as the sun sets at around 4 pm and this year they have located themselves around Little Sea in Studland – the inland lake just behind the dunes near Knoll Beach.

It’s not really known why the birds do this mass swooping display before they roost for the night but it’s believed they group together for safety to make it harder for predators like birds of prey to target them.

As the show finishes they all plummet to the ground for the evening and roost in the reed beds, where they all gather together for warmth.

“It’s quite an amazing sight to see”

“This is so special because it only happens for a short time of the year as the weather gets colder in the northern hemisphere and drives the migrating birds south.

“It’s also unpredictable – we don’t know how long the starlings will stay or how many will arrive in Studland, as it depends on the weather, although we hope they may stay here at least until the end of January.

“The best way to see them is to park in the National Trust Knoll car park and then walk through the dunes towards Little Sea. The side of the lake that runs parallel to the sea is a good vantage point to spot the spectacular evening show.

“However it’s advisable to leave dogs at home or keep them on a lead, so they don’t disturb the birds.

“It’s quite an amazing sight to see, especially as the number of starlings are declining in the UK – so yes, very special.”

New research claims eco moorings could save Studland’s seahorses A new type of boat mooring in Studland Bay could be the key to protecting seagrass – the essential habitat for seahorses - according to university researchers. 3 weeks ago 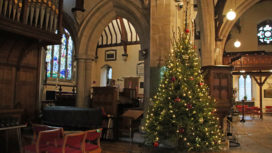 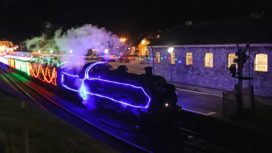 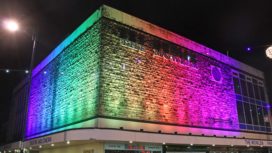 The Mowlem reopens after lockdown with a surprise! Love it or hate it, the exterior of Swanage’s theatre likes to be controversial and this Christmas, we've been gifted something unexpected - SEE VIDEO. 2 years ago