Burngate Purbeck Stone Centre at Langton Matravers has relaunched this summer following a tough two years when the pandemic threatened its existence.

The centre, dedicated to the ancient Purbeck craft of stone carving, is now fighting back with an increased range of courses to introduce people to Purbeck stone and the local stone industry.

The centre has just had a fresh relaunch

There’s also a longer term aim to have a programme of rolling exhibitions and a brand new link up with Bournemouth University from this autumn, to introduce architecture students to the use of Purbeck stone in construction.

But one of the trustees admits the next few months will be crucial in establishing the long term viability of the centre.

Juliet Haysom is one of the new board of trustees, steering the centre out of the Covid crisis, which saw courses cancelled and the future of the centre hanging in the balance. She said:

“We are re-energising the relationship between Burngate and the local stone heritage and offering a much wider range of courses.”

“This summer is going to be critical”

“It’s been a challenging time over Covid and a couple of people who have given years of dedication to the centre recently stepped down.

“It’s been really difficult for tutors, who lost out on teaching income. We had some financial support for the centre during Covid when we weren’t able to run courses. But frankly, we’re very lucky to still be going.

“This summer is going to be critical, and our courses have to be financially self sufficient because we haven’t got any other source of funding. We’ve aimed to keep them as affordable as possible, as we know the rise in the cost of living is having an impact.”

A recent introduction to stone carving course at the centre

As well as the existing courses offering introductions to creative stone carving, there will now be a pilot stone masonry course, focused more on the discipline of producing geometrical shapes.

Other courses will look at the geology of the area, sketching using materials gathered from the landscape and even creative writing.

Many of the courses are suitable for both those living locally and those just visiting. The ‘Have a Go’ stone carving course is especially suitable for families looking for a day out with a difference!

Their grandfather Walter had a quarry and masonry works initially on St Adhelm’s Head in the 1930s before her parents bought the site between Langton and Kingston from the Landers brothers. Treleven Haysom has written ‘Purbeck Stone’, the definitive book on the local industry.

The refurbished Burngate centre won’t have a shop – at least in the short term – to give over more space for displays. There won’t be a café this summer either, because of a shortage of volunteers.

This summer will be critical for the future of the centre

Juliet became a trustee in January 2022 and the board have all been appointed since 2020.

A tutor for the London-based Architectural Association, Juliet ran courses by Zoom during Covid, which had the unexpected advantage that she was able to show students round her family quarry virtually.

As well as plans for collaboration with Bournemouth University, the centre recently hosted students from Swanage School who produced carvings for the pier’s 125th anniversary.

One of the aims was to get students interested in seeing the stone industry as a possible source of employment. As an educational centre, Burngate wants to show that there is not just a history of stone work in Purbeck but a future.

Getting people interested in the stone heritage of the area 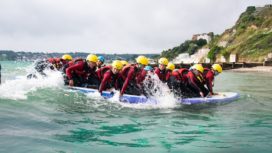 Swanage Lifeboat Week launches for 2022 with brand new ducks! After an absence of two years, the major week-long fundraising event for Swanage RNLI is back, along with the ever popular duck race. 2 hours ago Complete closure of Dorset mainline train service due to strike action 1 day ago Dorset campaign boosted as some Co-op stores stop sale of barbecues 2 days ago What a week – Swanage Carnival 2022 ends with a bang! 3 days ago Swanage Railway suspends steam loco service after track side fire 4 days ago