Store wars as Co-op objects to new Lidl at Wareham

The Co-op has told Dorset Council planners that, “There is no need for an additional foodstore in Purbeck”, and has urged them to reject plans to build a Lidl at Wareham.

The discount store Lidl has hit back and claims that the Co-op, which has three shops in Purbeck, is just trying “to maintain their (sic) market share” by objecting to the building of a new supermarket that offers shoppers cheaper prices.

The Co-op has employed a planning consultant to submit a 16 page report to object to the budget supermarket just off the Sibley Pottery roundabout on the Sandford Road.

As well as claiming that there is no need for another supermarket in Purbeck, Pegasus consultants on behalf of the Co-op say that the site is within the Green Belt and “open countryside”.

The report goes on to say that Lidl:

“…has made no attempt to demonstrate very special circumstances for the proposed development. As a result, this planning application falls at the first hurdle and must be refused.”

Currently the Co-op has a store in the centre of Wareham and a second shop out of town along the Sandford Road, not far from the proposed site for the new Lidl.

The Co-op is also in Swanage, which is one of its best performing stores in the UK, with few other local competitors.

The Co-op also has a second nearby store at the Texaco garage on Sandford Road, not far from the new proposed Lidl

On behalf of Lidl, Christopher Tookey from RPS Consulting Services has submitted to council planners a stinging reply to the Co-op’s claims:

“Overall, none of the objections raised by Co-op are new or issues not covered in the technical reports submitted with the planning application.

“I am sure you will be cognizant that uppermost in the Co-op’s mind will be a desire to maintain their market share and stop a competitor from opening a store within their catchment that will reduce their turnover.

“I believe that is the basis for their objection and you should have regard to that when considering how much weight to give them.”

The application from Lidl is for a 1,411 square metre sales area including a bakery, longer style tills with dual packing and customer toilets.

There will be parking for 114 parking spaces including accessible, parent and child and electric vehicle charging spaces as well as cycle parking.

Wareham Town Council, Parish of Wareham St Martin and Wareham Town Trust have all objected to the plans along with the Co-op.

Their objections, all along a similar vein, are that it is on land designated as Green Belt and should be protected from development and that the Lidl would harm business in the town centre.

“…will directly compete with the lines sold by Sainsbury’s, the Co-op, the Spar convenience store at Carey and other grocery shops in Wareham. The fact that its prices are 30 percent lower than the large retailers like Sainsbury’s and the Co-op will obviously make it very likely to result in significant trade diversion from these existing stores.”

Despite Wareham’s representative bodies objecting, there are already more than 200 local residents who have written in support of the budget supermarket planning application. Here’s a few examples:

“I fully support this application as it will be good for Wareham in light of rising food prices, fuel costs and also helping people to remain local when shopping.”

“This store would provide a resource that would be invaluable to the area which has a large population catchment size and is currently poorly served, with an absence of any substantially sized supermarkets. This would encourage shorter road journeys and reduce the average mileage for shopping trips and also serve well those who have no vehicles for longer trips.”

“We would love to have a Lidl locally for more choice and better value.”

“On balance I support this application as it will bring a more affordable shopping option for many, reduce car journeys to Poole and does not materially affect what might be considered a green belt or sensitive site.”

While there are more supportive comments than objections on the planning website from local residents, there are concerns over the impact on traffic and the Green Belt.

“The traffic is already notoriously bad during the summer months and at peak times on Sandford Road, to the point where we often don’t venture to the local area at certain times because of the queues. There is no proposal they could make that won’t make this terrible situation even worse.

“It is unnecessary to build another store on Green Belt countryside that will fundamentally change the character of our town. We already have the choice of several convenience stores, a supermarket and independent businesses which will suffer as a result. Plus within a short drive, there’s a large Tesco, Asda, Aldi and even another Lidl.”

The planning application is currently open for people to submit their comments until the end of January 2023.

It will then be decided whether it should be delegated to council planners or passed to councillors to make the final decision whether to grant planning permission or not.

New Salt Pig eatery in Studland replaces old Middle Beach cafe Following the controversial closure of Middle Beach cafe by the National Trust, a new venture has been set up nearby - The Sandy Salt Pig. 6 days ago 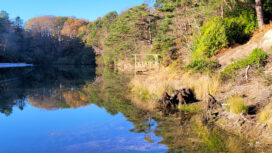 Take the plunge at Blue Pool thanks to new wedding licence Couples who got engaged over Christmas and the New Year have a new venue in Purbeck to consider in 2023. 1 month ago