In the spirit of cooperation, Swanage and Purbeck Rotary and the Harmans Cross village hall committee have been helping each other out, to make their separate summer fairs a success.

Swanage and Purbeck Rotary held its summer fete at Sandpit Field in Swanage on Thursday 11th August 2022 and the Harmans Cross fair, in the field next to Harmans Cross Hall, is from 12 noon on Bank Holiday Monday 29th August 2022.

“Recently we’ve been building and developing the relationship”

“The village hall and Rotary have been working together for many years but recently we’ve been building and developing the relationship. This year, we jointly bought a new marquee. Not something we would buy on our own and Rotary members came over and helped put it up.

“We’ve also hired the Swanage Carnival marquee – it’s much better to keep the money within the community, rather than it going to a commercial provider.

“Our major challenge is getting enough volunteers – the event is really big for a village fete – we had around 2,000 people in 2021 – so having the Rotary members coming along to help us with car parking, stalls and refreshments is invaluable.”

The Tuba Libres band, seen here in 2021, are returning to perform at the Harmans Cross fete this year

The team from Harmans Cross village hall also pitched in to help the Rotary members with their fete earlier in the month.

On a blistering hot day, there were plenty of traditional stalls, plus lots of community groups like Sustainable Swanage, Planet Purbeck and the RNLI setting up gazebos, giving them the opportunity to spread the message of what they do.

The shared marquee was used as the refreshment tent and provided vital shade and cold drinks throughout the day.

“Helping each other out and sharing resources”

“We’ve built strong links with the Harmans Cross committee – helping each other out and sharing resources.

“This year, we had our challenges as it was our first summer fete for three years – we called it off in 2021 just six weeks before it was due to happen. With the best will in the world, it’s hard to remember just how we did things in past years but it’s like riding a bike, after a while the knowledge all starts to come back!

“Of course the purpose is to raise money for local good causes and while it’s difficult to know exactly how much we’ve raised until we add it all up, I’m sure we’ve done well.”

Rotary member Sue Whitton in charge of all the cake!

One of the main charities being supported by Rotary this year will be the Purbeck Community Youth Foundation.

The Harmans Cross fete will also be raising money for local charities including #Willdoes which helps young people improve their mental health.

The money will also go towards the upkeep of Harmans Cross Village Hall which costs £10,000 a year to run, as well as improving the village playground by providing more equipment for younger children and fencing it in.

One of the hottest days of the year at Sandpit Field

More events later in the year

Both organisations have plans for more events later in 2022. Rotary have a tea party planned for October at All Saints Hall in Swanage, as well as all of their usual winter events including the Christmas Market and Santa’s Sleigh.

Harmans Cross Village Hall will be running more movie nights with its new surround sound system, as well as an Abba tribute band at the end of September.

“Great to see all the organisations working together”

“It’s so important to hold local events that bring all the community together and great to see all the organisations working together.

“The only complaint I have is that the Rotary fete was too hot. We usually moan about the weather but it was probably too good – however I’m sure we will be in our wellies next year!”

Despite it being a Bank Holiday weekend, the weather forecast for the Harmans Cross Fete is dry with sunshine and a comfortable temperature of 20 degrees celsius.

Splash of colour at Blue Pool returns to illuminate Purbeck attraction Last year’s sell-out sound and light show is back for 2023 at Blue Pool near Wareham with more music and plenty of dazzling colour. 7 days ago 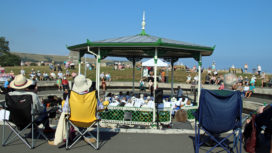 Watch out for ‘floating terrors’ washing up on Purbeck beaches Walkers along the Purbeck Coast, especially those with dogs, are being warned to look out for a venomous sea creature washing up on shore. 12 hours ago Swanage woman jailed for stealing cash from Dorset Police 2 days ago New mystery object on Swanage Beach sparks intrigue 3 days ago Swanage Railway volunteer signals his retirement after 31 years 4 days ago Dog plunges 28 metres from top of Studland’s Old Harry Rocks 5 days ago