After many years of neglect, the Swanage Bandstand has been restored to its former glory, complete with its original finial. It’s one of the few remaining bandstands in the UK built by cast iron manufacturers, Walter Macfarlane and Co at the Saracen Foundry in Glasgow.

Despite the pouring rain, the grand opening ceremony on the 26th October 2019, celebrated the two and a half year restoration programme by the specialist company, Lost Art. The bandstand was first opened on the 2nd August 1923 and it’s now been faithfully restored including the original green and white colour scheme..

This was all made possible by local residents and regular visitors, who managed to raise over £145,000 through donations and fundraising events.

In addition, there were many major individual donors, local businesses and others who contributed their time and assistance as well as money.

“I come down here and I see the roof on the bandstand and I think ‘yes’, how lovely that is and that is what the general feeling is. I’m proud of the people in the town. It’s pretty good!”

Chair of the Friends of Swanage Bandstand, Alan Houghton

Injured woman rescued from Dancing Ledge by Swanage RNLI A walker who’d fallen and injured her leg at Dancing Ledge along the Purbeck coastline had to be rescued by the Swanage lifeboat crew, in order to get to hospital. 2 weeks ago 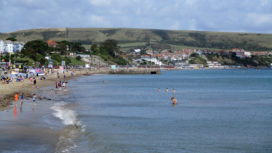 Taunton House B&B Taunton House B&B is only minutes away from the heart of the town and close to the seafront. It has four well-appointed bedrooms and welcomes well behaved dogs. The B&B ... 2 years ago 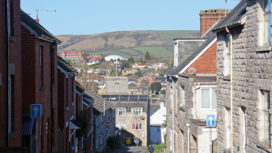 Swanage man arrested after woman in hospital with serious injuries Dorset Police have detained a man in custody following reports of an assault at an address in the centre of Swanage. 1 week ago Route into Purbeck remains closed as work to clear 10 trees starts 1 month ago Investigation into Studland heath fire reveals cause 5 days ago What’s on in Swanage for Christmas 2021 2 weeks ago Fire destroys large area of rare Studland heathland habitat 7 days ago

New clinic at Swanage Hospital to help with breathing difficulties A better breathing clinic has been launched at Swanage Hospital organised by a charity that provides care to patients facing life-limiting illness. 13 hours ago D-Day tank at Studland beach for documentary filming 2 days ago Super Saturday as sun shines for Swanage Christmas market and events 3 days ago Festival lights up Langton Matravers church with Christmas trees 4 days ago Dog rescued after falling over cliff in Swanage 4 days ago