Ian Brown has been awarded the British Empire Medal after 30 years of volunteering as part of the Swanage Coastguard Rescue team.

Speaking to Swanage.News, Ian Brown admitted that at first he thought it was a hoax call when he was phoned with the news but was delighted to find out it was true. He said:

“It’s an absolute honour to be nominated and accepted and I’m very humbled, as I’m part of a small cog in a very big organisation. Often I get asked how many are in my team and until this year, I’ve always said there’s 12 in my team, but actually there are several thousand. There’s the community of Swanage and a lot of people across lots of organisations.

“Key partnerships in this town are the coastguard, RNLI, National Coastwatch – that’s the maritime side. And then we’ve got Dorset Police, Dorset Fire and Rescue and South Western Ambulance, as well as the landowners like the National Trust and local farmers, that are all very supportive when we’ve got an incident.

“An awful lot goes on in the background to protect people in Swanage.”

“His calm authority has provided support for his teammates”

A spokesperson for HM Coastguard said:

“Ian has been serving with the team in his local community since 1990. He has been involved in many high-profile incidents where his calm authority has provided support for his teammates and others in often traumatic situations.

“Ian has also given of his own time to promote maritime safety in the local community and leads his team’s attendance in the annual carnival parade which is another opportunity to engage with the public.”

“It’s been a very demanding year”

With the large influx of visitors into the town over the summer, who couldn’t go abroad due to coronavirus, this year has been extremely busy for the Swanage Coastguard.

“It’s been a very demanding year…going out and doing a rescue is hard enough in normal times but with Covid as well, it really put the pressure on with the increase in incidents.

Despite having volunteered for 30 years, Ian says he isn’t thinking of retiring yet. He added:

“I’ve got very good support from my team, family and friends – they all play a big part. The number of spoilt meals, missed events and shopping trips – it’s a big part of being a coastguard.

“There’s been times this year when I’ve had to dig deep. With a fulltime job as well, it’s very time consuming but I work with some great people, who are very supportive – we’re one big team!”

“We can never thank enough those who go beyond the call of duty, putting the safety and wellbeing of others first. Dedication like this should be rightly recognised and I am so proud that our people have been honoured by Her Majesty.”

RNLI on the lookout for new Swanage Beach lifeguards Getting ready for summer 2022, the RNLI is inviting applications from those who would like to be beach lifeguards along the South Coast including Swanage. 2 days ago

Swanage Ambulance Car unstaffed while patient waiting times increase Swanage ambulance car has been sitting idle for up to three quarters of the month - at a time when emergency response times have more than doubled. 6 days ago

Swanage and Wareham firefighters do animal rescue! Ideally equipped for reaching the top of buildings and trees, animal loving fire crews were called to save a bird in Swanage and a cat in Wareham. 2 weeks ago

Celebrity couple share photos of New Year trip to Swanage While many famous people visit Swanage and keep it quiet, one well-known couple let everyone know what a good time they were having by posting on social media. 3 weeks ago 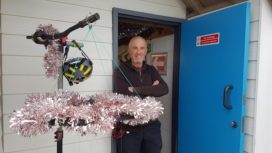 Swanage bike repair man changes gear to show off his art From bike art to North American Indian-inspired suncatchers as well as paintings by David Bowie tribute act, there’s plenty to discover at Artisans on the Beach in Swanage. 1 month ago 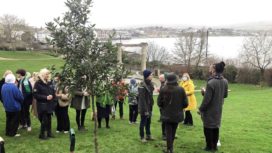 Tree 4 Henry – Holm oak planted in memory of much loved Swanage man Family and friends gathered to plant a tree at Prince Albert Gardens in Swanage in memory of Henry Searle, who sadly died aged just 25. 1 month ago

Jazz festival returns to Swanage after two year Covid break The line-up has been announced for this year’s Swanage Jazz Festival, back after a two-year absence because of Covid. 11 hours ago Visitors to Swanage Hospital need to take lateral flow test 1 day ago RNLI on the lookout for new Swanage Beach lifeguards 2 days ago Massive Swanage street party planned for Queen’s Platinum Jubilee 3 days ago Police hunt for driver of car ‘hidden’ in Swanage 3 days ago