Members of Swanage Cricket Club were bowled over with pride after being presented with a prestigious sporting trophy for the huge effort they make to involve the whole town in the game.

The Dorset-wide Jack Douch Memorial Trophy for cricket in the community was received by Swanage Cricket Club members Craig Wells, Chris Wood and Natasha Norman, along with a £500 cheque.

Involving the entire town in cricket

The money will be used to continue community projects at the club, which has recently completed a £150,000 extension to the pavilion at the Day’s Park ground.

A second pitch has also been laid for the third XI and to introduce more youngsters and women to the game.

But that has been the tip of the iceberg when it has come to involving the entire town in the sport, from primary school children to the over 50s.

The club’s youth section is well established with well over 100 members from the ages of five through to under 15s, including many girls who play the game.

Club members work with schools and a new link has been created with Purbeck View, a school for autistic young people.

With support from the community and local businesses, the club runs a Swanage six-a-side competition, hosts Dorset over-50s matches and – unlike many clubs – has continued to offer match teas. It also has plans to launch a 4th XI in the near future.

“Fortunate to have a real volunteer culture”

“We are fortunate to have a real volunteer culture, which means we can get a lot done. It is the same old faces, but there are lots of us.

“We really were delighted to receive this award because it is for the whole club and everyone associated with it.

“A few years ago we developed our youth systems and those players are now beginning their senior cricket careers.

“That is why we plan a 4th XI, so that youngsters and women who want to start playing hard ball cricket can have a game.”

Nick Douch, grandson of Jack after whom the trophy is named, presented it to Craig Wells from the club at a gala dinner for Dorset Cricket Board held at the Pavilion in Bournemouth on Friday 18th November 2022.

Nick is the managing director of Douch Family Funeral Directors which also runs the Dorset Funeral Plan, sponsor of the Dorset cricket leagues for more than ten years.

Jack played cricket in Dorset from the age of 14, was involved all his life and loved club cricket in the county. When he died in 2012 the trophy was created for clubs who do the most for their community.

“Swanage have done a magnificent job”

“There were some other clubs close to winning the award but Swanage
have done a magnificent job for their community.

“It is exactly what my grandfather would have loved. Club cricket was his passion and to see all the youngsters – including girls – playing the game would have delighted him.

“We sponsored the league for more than a decade through the Dorset Funeral Plan and it was wonderful to see all the enthusiasm for cricket at the dinner.”

Tea shed made out of galvanised iron

Swanage Cricket Club was formed during the 1920s after local farmer James Day provided one of his fields and said if they could make a cricket ground out of his rough pasture inside three years, he would give it to them.

The members immediately set to work to level, drain and cut the outfield and before the close of the 1927 season, a game was played on a matting wicket against Blandford.

The following year a proper square was laid, a chicken hut was transformed into a pavilion, and a tea shed built out of galvanised iron. Water and gas were connected and the club was a going concern.

On 1st February 1928, James Day leased the ground to the committee of the Swanage Cricket Club for 999 years at a peppercorn rent with a permanent right of way to the ground from the main road. 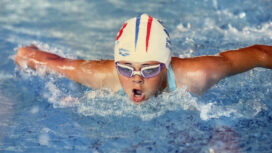 Swanage sailor stays on track for Olympics with success in Europe British sailing team member and Swanage resident Sam Whaley has come a remarkable fifth in the laser sailing European Championships in France. 2 months ago