Amid an Amber wildfire alert due to the dry weather, Swanage Fire Station has been called out to two fires over separate days.

The latest callout was on Thursday 23rd June 2022 involving an incident with a gas bottle at Spyway car park in Langton Matravers and the second was on the previous Wednesday when there was a fire on the railway embankment near Harmans Cross.

A crew from Swanage was sent just after 9 am to the National Trust-owned Spyway car park following reports of a gas cylinder alight.

A spokesperson for Dorset and Wiltshire Fire and Rescue said:

“On arrival the crew found a one litre camping gas cylinder alight and allowed this to burn out under their supervision and used one hose reel jet to extinguish a small area of grass and undergrowth that had caught fire.”

The fire was quickly put out and the cylinder was allowed to cool until it was at a safe temperature.

The railway embankment was on fire and spreading towards nearby gardens

Fire on the railway embankment

On the day before, on Wednesday 22nd June 2022, the call came in at 12.19 pm to go to a fire on the railway embankment near Harmans Cross, that had started to spread towards neighbouring gardens.

The steam locomotives on the heritage Swanage Railway can sometimes throw out sparks that may have led the dry grass to ignite at the side of the rail track.

A spokesperson for Dorset and Wiltshire Fire and Rescue said:

“Crews from Swanage and Poole were mobilised and on arrival found an area of railway embankment measuring 95 metres by 6 metres alight, which was extinguished using beaters and one hose reel jet.”

Swanage Fire Station added that the crews had to work hard to get the fire under control quickly in the hot weather.

The fire stations at Swanage and at nearby Wareham, are currently looking to recruit more on-call firefighters to tackle a wide range of incidents including commercial and domestic fires, road traffic collisions, animal rescues and flooding

These are roles for people who live and/or work within the local community, responding to emergencies when their alerter goes off.

More about the role of an on-call firefighter and how to apply, is on the Dorset and Wiltshire Fire and Rescue website

Heath fire at Stoborough closes main Purbeck road Fire crews from across Dorset and Hampshire, including teams from Wareham and Swanage were called in to tackle a large heath fire - WATCH VIDEO. 1 week ago 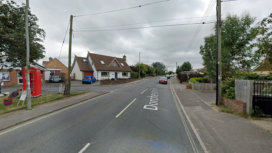 Girl hospitalised following car collision in Wool Dorset Police are looking for the driver of a black Peugeot, after a car failed to stop in Wool following a collision with a pedestrian - a 10 year old ... 2 weeks ago