A nostalgic mix of steam and diesel passenger trains plus the re-creation of a freight train from the 1950s and the 1960s will all be in action over Swanage Railway’s Winter Warm Up weekend.

Taking place on Saturday 7th and Sunday 8th January 2023, this special event is the first in a number of themed galas that have already been planned for this year.

Ex-Southern Railway late 1920s U class No. 31806 which used to haul holidaymaker trains to Corfe Castle and Swanage during the 1950s

The Winter Warm Up will see two 1960s heritage diesel locomotives travelling along the Swanage Railway line through the Purbeck countryside, as well as two steam locomotives, one from the 1920s and the other from the 1940s.

Operating to an intensive timetable, the heritage trains will run daily from 9.45 am to 5.10 pm between Norden, Corfe Castle, Harman’s Cross and Swanage.

Steam loco Manston back in action

Alongside the passenger service, a freight train will be running along the branch line, made up of wagons and box vans of the type that was once a familiar sight across Purbeck in the 1950s and 1960s.

For the avoidance of any doubt, passengers can’t travel on this train but it will be an interesting sight to see and a rare photo opportunity.

“Freight trains, like the one we will be re-creating during the two days of our Winter Warm Up event, used to run across the south of England for decades delivering goods and farm produce.

“British Railways stopped running freight trains to Corfe Castle and Swanage in 1965, a year before steam trains were replaced by diesel trains on the Swanage branch and six years before the line was controversially closed and demolished.

“It is not often that a Class 50 diesel-electric locomotive runs on the Swanage Railway so having the splendidly restored No. 50 026 ‘Indomitable’ hauling some of the trains will be a real treat.”

1960 ex-British Railways Class 33 diesel-electric No. D6515 Lt Jenny Lewis RN which hauled London to Swanage trains during the summer of 1963

Warm up in Swanage and Corfe Castle stations

At Swanage station the shop and refreshment kiosk will be open during the Winter Warm Up event.

While at Corfe Castle station, the goods shed museum will be open across the special weekend, along with the signal box museum and the book wagon that sells railway related books and magazines. 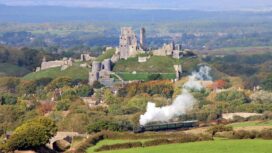 Swanage Railway volunteer signals his retirement after 31 years The man who set up Swanage Railway’s first signalling school – and helped ensure the safe operation of its trains as a signaller and signal box inspector - has retired ... 2 weeks ago