Swanage remembers all those who died in war

Remembrance Sunday events took place in Swanage although many attending, including the local MP, were delayed coming into town by travel chaos across Purbeck.

On Sunday 13th November 2022 all those who died in the two World Wars and other conflicts including the Falklands War were remembered with a parade through the town centre, a church service and the wreath laying at the war memorial.

The parade from The Mowlem to St Mary’s Church

The parade started at 2 pm from The Mowlem

All those taking part in the parade including the Royal Signals based in Blandford, gathered at 2 pm outside The Mowlem before marching along Institute Road, Kings Road East and Kings Road West towards St Mary’s Church on Church Hill.

Many visitors and guests, including member of parliament for South Dorset Richard Drax, arrived frustrated having sat in a long queue of traffic to reach Swanage.

Two sets of temporary traffic lights at roadworks on the A351 near Corfe Castle caused long delays for anyone driving in or out of Swanage, made worse by the simultaneous closure of the two alternative routes into the town.

The Studland Road between Corfe Castle and Swanage via Studland is closed for five weeks to install a new water main and at the same time, the ferry between Sandbanks and Studland is out of service for planned maintenance.

Heading from the church, up to the war memorial

The Remembrance Sunday service at St Mary’s Church was at 3 pm, conducted by the newly appointed rector of St Mary’s, Reverend Dr Ian Bird. The congregation then marched from the church up to the Swanage War Memorial.

Following prayers, the Last Post and a two minute silence, poppy wreaths were laid at the foot of the Purbeck stone monument by individuals and organisations including Richard Drax MP, Swanage Town Council, representatives from the armed forces, as well as Swanage and Purbeck Rotary and Swanage National Coastwatch Institute.

The events of the afternoon were organised by Swanage resident and former member of the Signals Regiment, Frank Roberts. He thanked all those who had taken part, especially the large number of young people who had joined in the Remembrance Sunday events.

By then, the sun had started to set and everyone made their way home.

Those travelling out of Swanage were then again stuck in long tail backs trying to get through Corfe Castle, with one driver saying it had taken them two and a half hours to get from Swanage to Bournemouth.

Brakelights shone the way home for many, as the queue to get through Corfe Castle started at Harmans Cross

Watch the parade through Swanage

Watch the ceremony from the air, filmed by Om Gurung 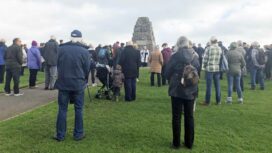 Swanage WW2 bomb survivors return 80 years to the day Two brothers, now in their 80s, led a ceremony in Swanage to remember the civilians who died in the town during a series of bombing raids. - WATCH VIDEO. 3 months ago