With audiences staying away due to an increase in Covid cases, The Mowlem in Swanage is launching a winter appeal to raise £5,000 to get it through to January 2022.

After nearly two years of lockdowns and smaller audience numbers to allow for social distancing, the whole of the theatre industry is in despair over the latest Omicron variant which is pushing its finances to the edge.

At The Mowlem, as renewed fears over Covid grew in December 2021, audience numbers have declined by 20 per cent week on week and at times the auditorium has been empty for some film showings.

The government announced on Tuesday 21st December 2021 that theatres could apply for new grant money but with the full details yet to be revealed it’s unclear what help The Mowlem might get and how quickly.

“It’s got to a stage when honestly, it’s cheaper to close but we don’t want to do that. We’ve fought so hard to improve the theatre, with so much effort put into the refurbishment.

“We want The Mowlem to be the creative community hub for Swanage – the heart and soul of the town.

“Since Boris announced the discovery of the Omicron variant our audience numbers have plummeted to the point where there have been less people here than in the Co-op.

“Last Sunday, we started the film but no one came at all, so I just had to turn off the projector and the heating to save some money. It’s totally soul destroying.”

“We really are in the worst case scenario“

The trustees have launched an appeal to cover costs through the rest of December and into January 2022.

It’s asking anyone who can, to either donate or share the appeal information to friends and family in the hope of raising £5,000.

“The generosity of Swanage is so amazing – in only a few days we’ve raised nearly £2,000.

“We really are in the worst case scenario where we are open but no one is coming and with little government support at the moment, so any donation however small would be really appreciated. We are on a knife edge.”

Tickets are still selling for shows in 2022

“So much to look forward to“

The Mowlem is planning to continue its Christmas programme for as long as it is able and has reintroduced full social distancing during its cinema showings.

It continues to sell tickets for the Swanage Drama Company’s panto, Snow White and the Seven Dwarfs in January and The Swanage School’s production of Joseph in early March.

“We really want to be here next summer – there is just so much to look forward to with all the festivals from the Jazz Festival to the Planet Purbeck Festival and so much in between!”

Stunning location – The Mowlem by night, viewed from the beach 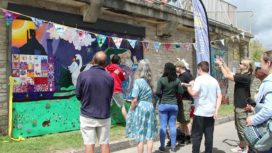 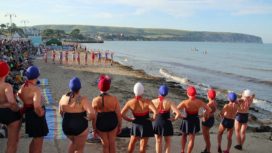 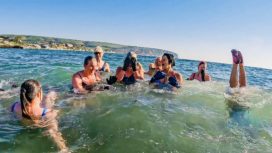