In a bid to illustrate the extensive damage that disposable barbecues can cause, Wareham Fire Station has released pictures that reveal the true extent of the scorched earth following the Wareham Forest Fire.

The fire that was accidentally started on Monday 18th May 2020 by a party of people cooking on disposable barbecues and having a campfire, ended up destroying 220 hectares of Wareham Forest.

Fire crews from across Dorset and Wiltshire, including Swanage Fire Station, eventually brought the blaze under control with round-the-clock shifts, although for weeks later, hot spots have continued to flare up.

Countless animals, reptiles and birds were killed, in what is believed to be one of the most devastating forest and heath fires in Dorset in living memory.

“A recent drone survey has revealed the vast scar left upon the ancient landscape at Wareham Forest after the recent fire. Please help us to prevent this from happening again. Leave the barbecue at home. Do not light fires. If you see a fire, report it immediately and dial 999.”

“Please help us by not lighting fires”

“We continue to ask local residents and visitors to the area to resist any activity that could lead to a fire starting. The main dangers are:

“PLEASE help us by not lighting fires, having barbecues in the open or doing anything that may set alight grass, foliage, heath or woodland.” 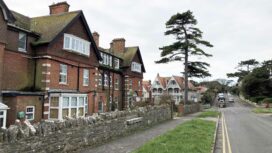 Plans to convert Swanage care home into flats An application has been made to change Wordsworth Care Home in Swanage into 16 apartments, following its closure after the death of 16 residents from Covid. 10 hours ago