Campsites across Dorset urged to think twice before lighting fires

With the dry weather continuing, Dorset and Wiltshire Fire and Rescue Service is asking campsite managers, particularly in rural areas like Purbeck, to consider preventing the use of barbecues and campfires on their sites.

It’s urging them to minimise the potential fire risks and if they can’t provide a hardstanding area for barbecues, to think about restricting their use at this time.

Swanage Fire Station along with a crew from Wareham, were called to this heath fire at Church Knowle on Thursday 28th July 2022

Spike in the number of fires

There’s been a spike in the number of fires affecting fields, heathland and open space during the current dry summer weather, with a recent heath fire at Stoborough caused by a portable barbecue.

Around a hectare of grassland, heath and gorse was burnt, when a barbecue was lit in a field and the strong winds caused a nearby hedge to catch alight. The fire then spread to the adjacent heathland.

Many campsites around Swanage will be full as the summer school holidays begin and the Swanage Carnival starting on Saturday 30th July 2022, draws hundreds of extra visitors to the area.

Restrict use of open fires in certain locations

The fire service says that site managers should carry out a risk assessment and provide both adequate firefighting equipment and some means to raise the alarm.

Also, where appropriate, the site rules should be amended to restrict use of open fires in certain locations, therefore reducing the chances of fire spread during high-risk periods.

“Campfires and fire pits can be a significant danger”

“Where campsites don’t have hardstanding available for barbecues, we would ask that they consider preventing their use. Campfires and fire pits can also be a significant danger, as it doesn’t take much for the wind to pick up, sending sparks and flames onto adjacent dry grassland.

“Most campsites should have at least six metres of clearance between pitches as a safety measure, but we would also encourage limiting use of any form of naked flame, and ensuring there is water supply easily available should the worst happen. Putting in some simple site requirements, and enforcing them, could make a huge difference.

“There are areas where fires are banned in law, and these are patrolled regularly, but in other areas, we are reliant on people acting responsibly. Barbecues, especially disposable ones, pose a significant danger, which is why we have our ‘Bring a picnic not a BBQ campaign’.

“We don’t want to stop people having fun, but we do need them to really think twice before they light any kind of fire.”

The fire service says that anyone running or visiting a campsite in a remote location is urged to make sure they have accurate address details, in case they have to call 999.

It’s also recommending the use of location apps, like What3Words to identify a rural area like a camping field.

Wartime bomb exploded by disposal team on Studland Beach A beach at Studland had to be closed so an old wartime shell could be detonated in a controlled explosion - WATCH VIDEO OF EXPLOSION. 6 days ago 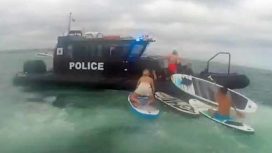 Near miss for Studland paddle boarders blown into path of ferry Dorset Police marine officers, out on patrol in Poole Harbour, had to be urgently diverted to help four paddle boarders that were heading into the shipping lane. 2 weeks ago