Dennis – Proves less of a menace for Swanage

Despite fears of coastal flooding from Storm Dennis at the start of the half term holiday, Swanage was largely unaffected by the poor weather conditions. Although at high tide, the gale force winds did create some impressive waves that rolled in and sprayed over the Banjo Pier.

The main damage was to the coastline, with the already saturated cliffs continuing to erode due to the heavy rain. On Saturday, Dorset Council officials closed off the steps down to Shep’s Hollow, the beach at the north end of Swanage Bay. The handrail has partially slipped down the cliff and the path is crumbling away. There are further landslips on the beach, that the Swanage Coastguard is describing as ‘liquid mud’ and warning people to stay away.

To escape the wind and rain, most people stayed indoors or sheltered in the town’s cafes and restaurants. The Mowlem benefited from the weather, with its showing of the film Dolittle over the weekend being well attended by families.

Some travel disruption was experienced due to the weather conditions. The Sandbanks Ferry had to stop operating on Saturday at 8.35 pm and didn’t resume until 8 am on Sunday. There was also localised flooding with heavy rain and a blocked drain on Saturday causing the High Street to flood by The Swanage School.

Power lines to be buried to restore beauty spot near Swanage Overhead electricity lines in Ulwell, Swanage, are being buried underground as part of a £15 million scheme to make the scenery more beautiful. 3 days ago

Watch out for ‘floating terrors’ washing up on Purbeck beaches Walkers along the Purbeck Coast, especially those with dogs, are being warned to look out for a venomous sea creature washing up on shore. 4 days ago

New mystery object on Swanage Beach sparks intrigue The sight of a newly installed concrete block with a pole and a camera-like device along Swanage’s seafront has left passers-by mystified. 6 days ago 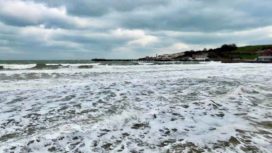 Yellow wind warning for Dorset issued by Met Office Strong winds are expected across Dorset with gusts between 50 to 60 mph in coastal areas like Swanage. 2 years ago 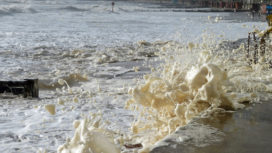 Swanage beachgoers warned of “treacherous sea conditions” by RNLI The RNLI has issued a safety warning along the South West coastline for this weekend, as a strong easterly wind is expected to bring large waves and unusually strong swells ... 2 years ago 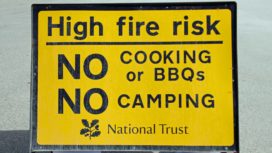 Second Amber wildfire warning issued for Dorset within a month A severe lack of rain for April and the resulting extremely dry heathland across Purbeck, has led to Dorset and Wiltshire Fire and Rescue Service placing the county under an ... 2 years ago

Chance to come and sing in Swanage with top musicians New dates have been announced for the opportunity to tune up the vocal cords and get expert tuition from distinguished church musicians at St Mary’s Church. 15 hours ago New Salt Pig eatery in Studland replaces old Middle Beach cafe 2 days ago Power lines to be buried to restore beauty spot near Swanage 3 days ago Watch out for ‘floating terrors’ washing up on Purbeck beaches 4 days ago Swanage woman jailed for stealing cash from Dorset Police 5 days ago