Langton Matravers’ parish councillors have expressed their disappointment at being told that the request for a 20mph speed limit through their village was “probably not looking positive” because there wasn’t enough evidence of “collision damage”.

Following a survey of local residents, where 92% of the 239 responses were in favour of a 20 mph limit, the parish council asked Dorset Council in July 2020 to lower the speed limit through the village from 30 mph to 20 mph to slow traffic down.

Easier for pedestrians and cyclists

This request was bolstered by the UK Government’s Secretary of State for Transport, Grant Shapps encouraging the introduction of 20 mph on some roads to make it easier for pedestrians and cyclists, following the advice to avoid public transport due to coronavirus.

At the parish council meeting on Thursday 8th October 2020, ward member for South East Purbeck, which includes Langton Matravers and the cabinet lead for highways on Dorset Council, councillor Cherry Brooks reported back on her discussions with the Dorset Council highways department on the matter.

“Has to be done on a safety basis”

She told the parish council meeting:

“To reduce the speed limit to 20 mph – that has to be done on a safety basis and meeting the criteria for the Highways Act but there is something called ‘20 is plenty’ and you can apply for that – there are stages to go through and it still has to be based on criteria, some of which is collision data, which there is no evidence of for Langton.

“So at the moment the answer to ‘Can we have a temporary 20 mph speed limit?’ is probably no. The general feeling of the officers is that just changing the number from 30 down to 20 would not actually stop behaviour.”

The ‘20 is plenty’ scheme is when signs are displayed along a road suggesting that driving at 20 mph is plenty. While it is not legally enforceable, it aims to appeal to motorists to voluntarily slow down.

“I am very disappointed with the answer”

Langton Matravers lead councillor for highway matters, Ian Vaughan-Arbuckle expressed his frustration to Cherry Brooks, at the lack of progress on the issue:

“I am very disappointed with the answer you have just given. I submitted on behalf of the council some weeks, no, months ago now, a fully documented piece for the proper consideration of a 20 mph speed limit in this village…

“I think the least that can be done is to answer the case that was put up, which had 90 percent support of the village. It is a very serious matter. I’m also disturbed by your answer that it can’t be done because if you look at this document, the Secretary of State for Transport is encouraging people to apply for 20 mph speed limits, so matters are changing.

“I did not say ‘No you couldn’t have it’. I said it was probably not looking positive…We have a legal framework within which we have to work and this includes collision damage and so far, for the tests that have been done for Langton there is not enough evidence to say that it needs to be put in on a safety basis.

“If it is a community wish, we can look at the ‘20 is plenty’ which I said, but that also has some baselines and we will get that document to you in the next few weeks.”

“We get continually fobbed off”

“This discussion has been going on for years and we get continually fobbed off with ‘we can’t do it – we have frameworks’. It is clear that highways departments are empowered by the ministry of transport to actually introduce 20 mph limits and quite honestly, you coming back and saying ‘I don’t think we can do it’, is not good enough.

“We as residents of this parish and residents of the county have a right to expect to be treated with a degree of respect and unfortunately I don’t think that is happening at the moment.”

Vice chair of the parish council, Pete Christie added that while there may not have been any recent vehicle accidents in the village reported to the police, he told the meeting that he had seen three physical collisions.

Cherry Brooks was asked to feed back the views of the parish council on the matter back to Dorset Council’s highways department.

In the meantime, councillor Ian Vaughan-Arbuckle reported to the committee that he now had seven volunteers who were willing to be part of a speed watch team which meant that they could monitor the speed of vehicles through the village, if the committee was willing to purchase a hand held speed camera for £300. This was agreed.

“We have a proud history of working with communities across Purbeck”

“The current central government push for urban 20 mph zones is to encourage more cycling and walking through residential areas. By doing this, it is thought that more people will be inclined to use active travel along these roads rather than using cars or buses.

“This doesn’t mean to say that rural areas cannot be considered for 20mph zones, but speed restrictions in these areas would be for a different objective (ie. road safety).

“We have a proud history of working with communities across Purbeck on these kinds of traffic-calming and road safety measures, including the installation of Speed Indicator Devices and crossing points (especially near schools), as well as supporting initiatives like Community Speed Watch (CSW).

“Dorset Council Highways officers are always happy to discuss ideas and suggestions with town and parish councillors and will continue liaising with Langton Matravers Parish Council on this matter.”

Dorset Council has recently installed a new pedestrian crossing outside St George’s CE VA Primary School in Langton Matravers to improve the safety of children and staff who need to cross the road. The crossing cost Dorset Council £40,000.

Complete closure of Dorset mainline train service due to strike action The whole rail network across Dorset, including trains to and from Wareham and Weymouth, will cease to operate for two days during the peak tourist season. 1 week ago 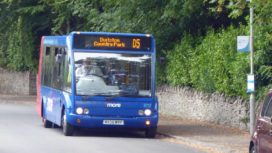 Durlston bus is back for summer school holidays ‘Use it or lose it’ is the message, as the Durlston Explorer bus service returns for just six weeks - a much shorter time than previous summers due to rising ... 3 weeks ago

Sandbanks Ferry to be out of service for five weeks The ferry that links Studland to Sandbanks in Dorset is to receive a full maintenance overhaul and refit which means it won’t be operational for about five weeks. 3 months ago