In challenging weather conditions, Swanage Lifeboat crew joined Poole RNLI to look for a person after a member of the public reported sighting someone potentially in difficulty in the water.

With winds gusting up to 45 mph, Swanage all weather lifeboat and Poole Atlantic 85 lifeboat launched and headed to the area between Bournemouth Pier and Boscombe Pier at around 11.20 am on Tuesday 8th November 2022.

Both Swanage and Poole lifeboats searched in the vicinity of the piers, while also having to cope with the strong winds and choppy sea.

“Conditions were rough with large breaking waves and spray, it was certainly challenging conditions but this is when our training comes into its own.”

Poole and Southbourne Coastguard teams also searched by foot along the shoreline and pier with air support from the police helicopter.

“A few sightings of floating objects”

“A few sightings of floating objects were made from the shore, but each one was discovered to be buoys of various types when they were investigated by the lifeboats.

“After about 90 minutes of searching, the UK Coastguard was happy that the report was a false alarm with good intent.”

“You could easily get swept into the sea”

With nothing untoward found, both lifeboats were stood down.

“Thankfully this was a call with good intent and nobody was reported missing. We urge those visiting the coast in rough conditions to be mindful of their surroundings as you could easily get swept into the sea. If you do see anyone in danger, call 999 and ask for the coastguard.”

Due to the poor conditions, Swanage Lifeboat accompanied Poole Lifeboat back to Poole Harbour before returning to the lifeboat station at Swanage.

The continuing bad weather means that the Sandbanks Ferry, that was meant to be heading to Falmouth for a major refit, has been delayed from leaving Poole Harbour by more than nine days. The company is waiting for a break in the weather for the chain ferry to be towed along the coast.

The ferry service between Studland and Sandbanks was suspended on Monday 21st October 2022 in anticipation of the work.

Originally the ferry company said that the planned maintenance work should take four weeks with the aim of the ferry resuming service in early December 2022, depending on the weather.

However the weather delayed departure is anticipated to make an early December return difficult to achieve. 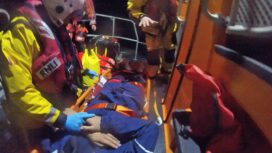 Swanage and Poole RNLI join forces to rescue man with head injury A multi-agency evacuation effort was launched after a yacht heading towards Poole Harbour reported that a crew member was drifting in and out of consciousness. 1 month ago