A special diesel train service on Swanage Railway has marked the 50th anniversary since British Rail closed the branch line from Swanage to Wareham and now plans are advancing to fully restore the service.

Despite huge opposition to the closure from people in Swanage, British Rail terminated the train service from Swanage to Wareham on Monday 3rd January 1972, with the last train running on Saturday 1st January 1972.

Peter Frost and Bob Richards at Corfe Castle Station with passengers on the special diesel service on 1st January 2022, who also travelled on the last 1972 British Rail train

A 90 day trial service between Swanage and Wareham

Fifty years later, it looks likely that all those who fought so hard to keep Swanage connected to the main line at Wareham, will finally get their way, as a 90 day trial service between the two towns is planned for later this year.

While final arrangements still have to be made and the continuing Covid pandemic makes any plans uncertain, the hope is to run a diesel service between Swanage and Wareham for 90 days starting in May 2022.

“Subject to regulatory consents, the completion of staff training and the conclusion of detailed planning work, the Swanage Railway hopes to operate a 90 selected day diesel train service to Wareham between May and September, 2022.”

Currently, trains are only allowed to run from Swanage to Norden, a few miles short of Wareham.

To mark the half century since the last British Rail train journey, Swanage Railway ran a three day diesel service from Swanage to Norden on Saturday 1st to Monday 3rd January 2022. The first fifty passengers each day were lucky enough to pay the 1972 price for their ticket of just 50p.

Returning to see the special service was former railway man Bob Richards, who signalled the last British Rail train from Wareham to Swanage on New Year’s Day in 1972.

Bob started as a teenage junior porter at Corfe Castle station in 1962 and retired from Network Rail at Wareham station signal box in 2007.

Bob Richards on the platform at Corfe Castle in December 1971

“Grit and determination of several generations”

“It doesn’t seem like 50 years ago since British Rail closed the line to Swanage. We thought the line would be saved and come back to life but when the tracks were lifted in seven weeks during the summer of 1972 everyone thought that was the end.

“It is incredible what the dedicated Swanage Railway volunteers have achieved over the past 45 years in bringing the line back from the dead – relaying the tracks, building new stations, developing the infrastructure, maintaining the railway and linking up with the national railway network.

“You have to admire the grit and determination of several generations of Swanage Railway volunteers in not taking no for an answer and for battling on, and winning, against the odds,”

“I never imagined the railway would be rebuilt“

Driving the 50th anniversary 1960s diesel train was Swanage resident, Peter Frost, who as a teenager was a passenger on that last British Rail train from 50 years ago.

Peter, who grew up in Corfe Castle, became a Swanage Railway volunteer driver in the early 1980s. He said:

“It was great to drive the special train into Corfe Castle Station and see Bob Richards waiting on the platform like he used to when he was a signalman 50 years ago. It was a brilliant day that I will always remember.

“I have very happy memories of Bob who was very kind to me as a youngster when I was growing up in Corfe Castle because he could see I was fascinated by the railway.

“When I rode on the last train as a 13 year old, I never imagined the railway would be rebuilt and that I would be lucky enough to be a volunteer on it for 45 years. I’ve enjoyed every minute of it and the work is incredibly rewarding with great people,”

Swanage Station in 1975 with the rail track removed

Swanage Railway Society fought hard to save the service

After the closure of the Swanage branch line in 1972, there was a six month period before British Rail was allowed to lift the track and recover its assets.

During this time, the Swanage Railway Society fought hard to save the service, offering to buy it and run it as a local service.

However six months to the day after the line closed, British Rail determinedly started to rip up the track to the anger of residents including the local MP at the time, Evelyn King.

In just seven weeks, six and a half miles of track had been sold for scrap.

Referendum of Swanage residents in 1975

After three years of campaigning by railway enthusiasts and the local community – and following a referendum among Swanage residents in 1975 – the town council gave the Swanage Railway Society a one year lease of the disused terminal station.

The rebuilding process began in 1976 and sections of track started to be relaid.

Covid struck and all plans were derailed

However by 2017 all the track from Swanage to Wareham had been relaid by volunteers and a 60 day trial diesel service took place.

A 90 day trial service to Wareham was planned for 2020 but then Covid struck and all plans were derailed.

Having survived the pandemic so far, the 90 day trial should now go ahead this year, with the possibility, depending on its popularity and economic viability, of introducing a full train service between Swanage and Wareham, over the following years. 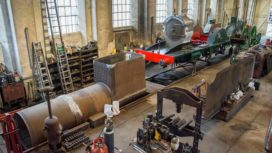 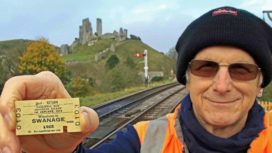 Travel on Swanage Railway for 50p to mark 50th anniversary The heritage railway in Swanage is offering a limited number of tickets at 1972 prices to mark 50 years since the last British Rail train trip. 2 months ago 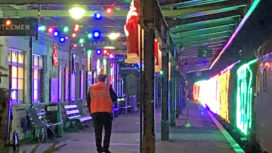 Celebrity couple share photos of New Year trip to Swanage While many famous people visit Swanage and keep it quiet, one well-known couple let everyone know what a good time they were having by posting on social media. 3 weeks ago Swanage post office set to move to new town centre location 1 month ago Swanage man arrested after woman in hospital with serious injuries 2 months ago Investigation into Studland heath fire reveals cause 2 months ago Massive Swanage street party planned for Queen’s Platinum Jubilee 3 days ago