Swanage sailor stays on track for Olympics with success in Europe

British sailing team member and Swanage resident Sam Whaley has ended the year on a high, coming a remarkable fifth in the men’s laser sailing European Championships in France.

Out of a field of 137 competitors from across Europe, this was quite an achievement and comes after finishing 11th in the World Championships earlier in the year in May.

Got what it takes

Sam Whaley, who first learnt to sail at Swanage Sailing Club as a child, now has his eye on representing Great Britain at the Paris Olympics in 2024 and this solid result shows that he’s got what it takes.

At one point during the six day competition in Hyeres in France, Sam was in a disappointing 65th position but managed to make a comeback, determinedly chipping his way up the score sheet into fifth place.

“It’s great to finish off the year on such a high. It still hasn’t quite sunk in, given the fight I had at the start of the week but hopefully this will set me up well for 2023 and beyond.

“For now it’s time to figure out how to make the next step up and win these events. Full steam ahead!”

Talk about Pathway to Paris 2024

Sam is now back home and will be giving a talk in the evening on Friday 25th November 2022 in Swanage called Pathway to Paris 2024, detailing the path to the Olympic Games, the qualification process and what it takes to win a medal.

They’ll also be a chance to meet Sam and ask questions about sailing. 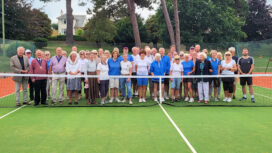