Travel on Swanage Railway for 50p to mark 50th anniversary

The heritage railway in Swanage is offering a limited number of tickets at 1972 prices to mark 50 years since the last British Rail train travelled from Wareham to Corfe Castle and Swanage, before the line was controversially closed down.

A special 50th anniversary diesel service will run for three days between Norden and Swanage from Saturday 1st to Monday 3rd January 2022.

The first 50 people purchasing tickets online for each of the three days will get their tickets for a bargain 50p.

Opposition of local people and councils

Opened in May 1885, the branch line from Wareham to Swanage was closed by British Rail – after five years of trying against the opposition of local people and councils – on the morning of Monday 3rd January 1972.

Because there was no winter Sunday train service, the last British Rail trains ran between Wareham and Swanage on Saturday 1st January 1972 – New Year’s Day.

End of the line for this British Rail journey in 1972

One of the people to travel on the last train in 1972 was Malcolm Muro, who was at the time 16 years old. He now volunteers as a signalman on Swanage Railway and lives in Wool. He said:

“It’s important that the 50th anniversary of the last British Rail train from Wareham to Swanage is marked because the branch line’s controversial closure led to a remarkable rebirth against all the odds – showing the power of the human spirit and what it can achieve.

“It certainly doesn’t seem like half a century since that last train moaned and juddered its way through the Isle of Purbeck on that cold and depressing night.

“Few people on board the train thought the line would come back and the tearing up of the tracks six months later seemed to seal its fate forever.

“Thankfully, a group of railway enthusiasts, and community volunteers, had other ideas. After four years of campaigning, the fledgling Swanage Railway Society was given a one year lease of the boarded up Swanage Station where restoration work slowly began in 1976 – second-hand track being re-laid by hand.”

Malcolm Munro, who as a 16 year old, travelled on the last British Rail train trip from Wareham to Swanage in 1972

The tickets for the special 50th anniversary diesel service will be available to buy online from Sunday 5th December 2021.

Those not lucky enough to scoop a 50p ticket, the 2021 price will be £10 for adults, £5 for children aged five to 15 years, with children aged under five travelling free.

All those travelling over the three days at the beginning of January 2022 will be issued with a special commemorative card ticket, similar to the one that those travelling on the last British Rail train received in 1977. 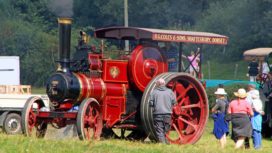 Swanage Railway’s vintage steam rally is back and it’s bigger Following the success of Swanage Railway’s first Roads to Rail steam event last year, it’s returning for 2022 with more steam traction engines and the chance to dress up in ... 3 weeks ago 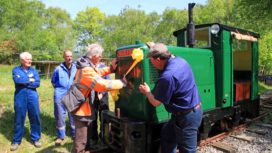 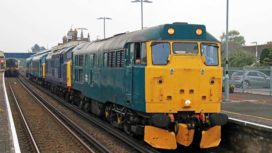 Acclaimed author headlines Dorset energy debate on achieving net zero An impressive array of experts have been invited by eco groups Planet Purbeck and DorsetCAN to lead a public debate on the energy crisis. 11 hours ago Marine adventures at Kimmeridge as part of national wildlife event 1 day ago Fresh clams to be sold in Swanage in new venture 2 days ago Thirty year stamp of approval for Worth Matravers firm 3 days ago Swanage Carnival announces new events for 2022 4 days ago